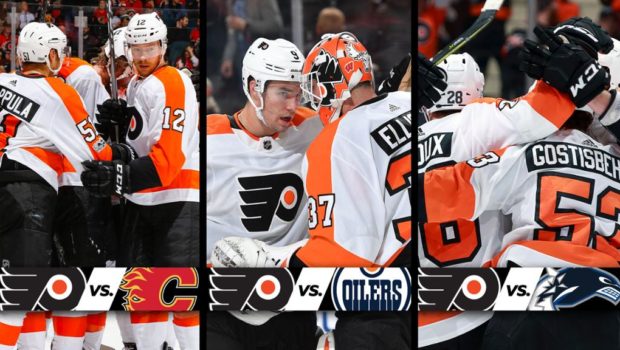 HOW THE SLEEP-WALKING FLYERS WON 3 IN A ROW ON THE ROAD AND JUMP-STARTED THEIR SEASON!

How did the Flyers do it, after entering the trip on a 10-game winless streak (0-5-5)? Here are five reasons.

Even during most of his eight starts over the course of the 0-5-5 stretch that preceded the trip, the play of goaltender Brian Elliottwas a bright spot for the club. There were games where his actual play in net superseded unimpressive stats lines and games where the Flyers simply could not scratch out enough offense to win low-scoring matches. During the western Canada road trip, though, Elliott lifted his game to an even higher level, and backboned the club through critical junctures where games that could have gotten away from the team eventually stabilized.

The Flyers made a tweak to their forechecking system during the road trip, employing more of a 1-2-2 setup rather than a 2-1-2. The purpose of such a change is to make it harder for opponents to find time and space on the rush if they beat the initial forecheck attempt. Executed well, it leads to more opposing turnovers and chances to counterattack.

The volume of opposing shots actually spiked during the first and third games of the Flyers’ road trip – there were also issues with Flyers turnovers in dangerous areas, especially early in the third game – but Elliott’s play repeatedly erased mistakes.
Elliott was selected as the night’s first star of the game in Calgary. In reality, he was deserving of mention in every game.

Even if Michal Neuvirth had not gone down with an upper-body injury, necessitating the recall of second-year pro Alex Lyon from the Phantoms, Elliott very well may have played all three games in the four-night span. The Neuvirth injury made that a necessity with the team still fighting to make up ground in the standings. Elliott could scarcely have performed any better.

Breaking up a top line that’s been clicking is risky business even if other lines are struggling to score. Sometimes, in trying to “spread the wealth,” a team can end up with no lines that effective instead of one. However, the Flyers’ month-long struggles for secondary scoring beyond the highly successful trio of Claude Giroux, Sean Couturier and Jakub Voracek resulted in head coach Dave Hakstol finally making changes that included the top line.

At least for the time being, the changes worked beautifully. Three different lines produced a high volume of scoring chances, especially the reconfigured first and second lines.

During the trip, the Flyers moved Wayne Simmonds onto the line with Giroux and Couturier. The line was perhaps a bit less dynamic as it had been with Voracek, but still generated a healthy share of scoring chances at 5-on-5 despite not scoring an even strength goal as a fully intact unit. The three players did get onto scoresheet on the power play and also into the plus-column at five-on-five during a couple partial line changes.

A very encouraging sign: Simmonds looked like himself again in winning puck battles and creating space down low. The streak-scoring reigning Bobby Clarke Trophy winner scored goals in each game of the trip, albeit via a power-play goal in Calgary and two empty netters. At the end of the night, every goal counts the same.

An equally encouraging sign: Voracek kept right on racking up the points both at even strength and on the power play. His presence on a line with Michael Raffl (with whom he previously played many times in the past when Raffl skated with Voracek and Giroux) and Valtteri Filppula produced instant chemistry. Raffl scored a goal in every game of the road trip, each and every time via setups from Voracek. Filppula had one goal and two assists on the trip as well.

Another line change that drew less attention but proved effective at key junctures: Jordan Weal played his best stretch of hockey since October as he played on a line with Scott Laughton andTaylor Leier (who returned to the lineup after sitting out the previous three games as a healthy scratch). Laughton had a two-goal game in Calgary, while Weal created a team-wide confidence-boosting tally for the center early in the third period to restore a three-goal lead. Leier got the secondary assist. Weal later broke out of his goal scoring drought with a power play goal in the Edmonton game.

The Flyers’ loss against Boston was an ugly one in many regards as the game progressed. However, one hopeful but overlooked sign from that game was that Philly finally seemed to staunch the bleeding on the penalty kill that plagued the team since mid-November. The power play also produced a would-be goal against Boston that was ultimately disallowed upon challenge due to incidental contact by Simmonds with Bruins goalie Tuukka Rask.
With the exception of yielding a shorthanded goal in Edmonton and not doing much with a five-minute power play in the third period of the Calgary game, the Flyers’ special teams were quite good during the road trip. That was a major change from much of the team’s winless streak.

The Flyers showed pretty good discipline in only taking six minor penalties during the road trip; two in each game. Philly went 6-for-6 on the PK during the trip. Much of the credit goes to Elliott being the team’s best penalty killer as needed, especially during the first penalty kill of the Vancouver game where he was under siege. Overall, though, the Flyers penalty killers as a whole did a better job at boxing out, clearing pucks when there was an opportunity to do so and in taking away the lanes.

On the power play, the Flyers scored at least once in every game of the trip: 1-for-3 in Calgary, 1-for-4 in Edmonton, 2-for-6 in Vancouver. Simmonds, Weal, Shayne Gostisbehere and Giroux notched man advantage tallies during the trip, while Voracek was an assist-generating machine. The secondary power play unit showed some signs of improvement as well, despite not scoring apart from second-unit member Weal being out with most of the first unit at the time of his goal.

4. YOU CREATE YOUR OWN LUCK

The Flyers had virtually no bounces or marginal calls go their way during the winless streak. Some of those factors evened out a bit during the road trip. In hockey, however, a team’s own play often goes a long way toward good or bad fortune.

For example, the Flyers benefitted from a phantom high-sticking penalty on Michael Frolik in the Calgary game. It was actually Flyers’ defenseman Andrew MacDonald’s stick that accidentally caught Voracek up high. Diligent work along the boards preceded the gifted power play chance. Even more important, the Flyers took full advantage by scoring on that power play.

In this case, the Flyers had some more good fortune. Couturier did not intend to send a slap-pass from Voracek to Simmonds. Couturier was trying to tip the puck on net. As it worked out, though, the play resulted in a tap-in goal near the post for a wide-open Simmonds.

Was it favorable puck luck? Certainly. But when players are in good position and the puck is moved crisply eventually there will be a few favorable bounces to offset plays that narrowly go awry.

During the 10-game skid, the Flyers had major problems putting games away in the third period. Not every third period was played poorly but Philly goals were way too scarce and leads (even multi-goal leads) were not protected with strong enough closeouts.

On the just-completed road trip, the Flyers outscored their opponents by a combined 4-1 in third periods. Two of the Flyers’ goals were Simmonds empty netters to solidify victories. Anticlimactic final moments and multi-goal final margins sure beat the alternative of hanging on for dear life until the final buzzer or, worse, yielding a 5-on-6 goal.

Overall, even apart from the goals they scored, the Flyers generally did a good job at limiting the quality of opposing chances. Many shots came from above and outside the dots, and Elliott saw most of the shots and controlled rebounds.