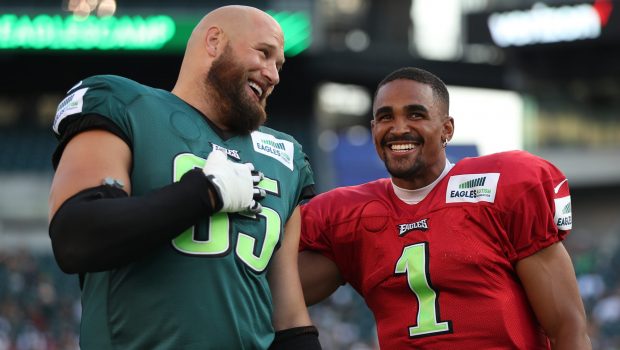 SLEEP ON EAGLES QB JALEN HURTS IN FANTASY AT YOUR PERIL!

It seems like no one knows what to make of Eagles QB Jalen Hurts.

He only played in four games last year after Carson Wentz was benched.

And he showed flashes of greatness.

But then flashes of awfulness.

Of course, the Birds were beaten up along the offensive line and in the receivers room by the time rook Hurts (above with right tackle Lane Johnson) began taking snaps.

And now he has weapons and the O-line is healthy.

So, what’s his potential?

16. In Week 14 of last season, Jalen Hurts started his first of four straight games as QB for the Eagles.

17. The wide receivers with the most routes run during that four-game stretch were rookie Jalen Reagor, who played his eighth career NFL game in Week 14, and former college quarterback Greg Ward, who in 2019 played wide receiver for the San Antonio Commanders of the now-defunct AAF.

18. It would be the final four games of Doug Pederson’s tenure as head coach of the Eagles.

21. Those numbers prorated over a 16-game season would be 532 pass attempts and 164.8 fantasy points with his legs.

22. Last season, there were only five quarterbacks to throw at least 400 passes and score at least 60 points with their legs.

23a. Hurts is going in the 11th round in ESPN leagues.