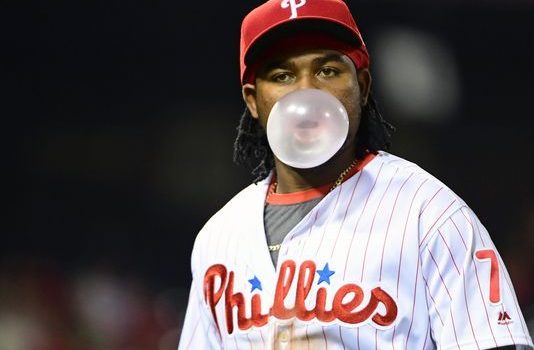 Maikel Franco took such a wild cut, his helmet tumbled off his head.

Franco took a breath, relaxed and used an easy swing that kept his equipment in place and slammed the ball into the seats, his second grand slam of the month, helping the Phillies beat the Miami Marlins 7-4 last night for their fifth straight win.

“I just try to calm down, try to see the ball and put a good contact on it,” Franco said.

Franco connected off Wei-Yen Chen (2-1) in the third inning with a shot to left-center for a 4-2 lead. With two runners on, Odubel Herrera singled to load the bases. Phillies pitcher Vince Velasquez was held up by third base coach Juan Samuel to load the bases.

Franco, who had three hits, made up for the conservative baserunning with his fourth homer of the season.

The Phillies won a game against the Mets, swept a three-game set against Atlanta and beat the Marlins in front of a solid crowd on $1 hot dog night for the modest winning streak. The Phillies (10-9) are above .500 for the first time since an opening day victory.

“It’s good to see the guys have the fight in them and not worry about it and keep moving forward,” Phillies manager Pete Mackanin said.

Velasquez (1-2) went 6 1/3 innings in his longest outing of the season and struck out three while lowering his ERA to 6.33.

Freddy Galvis hit a solo shot for the Phillies, and Michael Saunders added a two-run homer in the eighth.

Because of scheduled days off and a rainout, both teams played for the first time since Sunday. Minus the All-Star break, the Phillies hadn’t had consecutive days off during a season in three years, and they needed a couple of innings to knock off the rust.

Dee Gordon tripled off Velasquez on the first pitch of the game and later scored, and Martin Prado’s second homer of the year made it 2-0 in the third.

All three Miami pitchers gave up home runs. The staff has allowed 29 this season.

“It concerns me a little. We’ll get it straightened out,” Marlins manager Don Mattingly said.