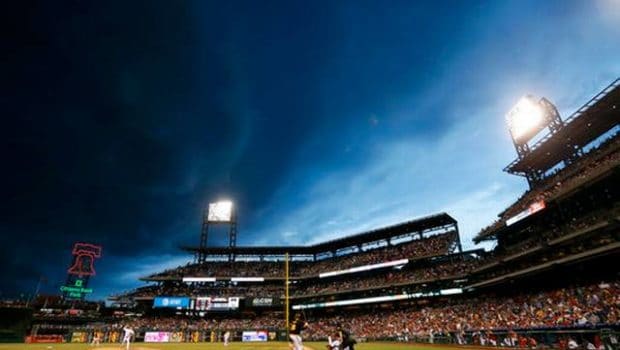 SKY IS FALLING ON PITIFUL PHILLIES IN 4-3 LOSS TO PADS!

Austin Hedges hit a pair of solo homers and had a tiebreaking sacrifice fly in the ninth as the Padres beat the Phillies 4-3.

After Cory Spangenberg and Carlos Asuaje hit singles off Hector Neris (2-3), Hedges fouled off a safety squeeze before hitting a fly ball to right-center that drove in the go-ahead run.

Padres starter Clayton Richard allowed one run and five hits in six innings before a 94-minute rain delay forced him out. Brad Hand (2-4) got four outs for the win and Brandon Maurer finished for his 18th save.

Following the long rain delay before the bottom of the seventh, the Phillies rallied off San Diego’s bullpen.

Cameron Rupp got it started with a single off Phil Maton, and pinch-hitter Nick Williams followed with a double. Rupp scored on a groundout, and Freddy Galvis hit an RBI single off Hand to tie it at 3-3.

“Excellent job by (Pivetta),” Phillies manager Pete Mackanin said. “Two of the three homers were on hanging curve and hanging slider but he pitched very well and should’ve won.”

The Phils’ Tommy Joseph hit an opposite-field shot to right for his 15th homer in the fourth. He also had a double and walked twice.

“Still some things I’m working on but I’ve done a better job of putting the ball in the air which helps with extra-base hits,” he said.