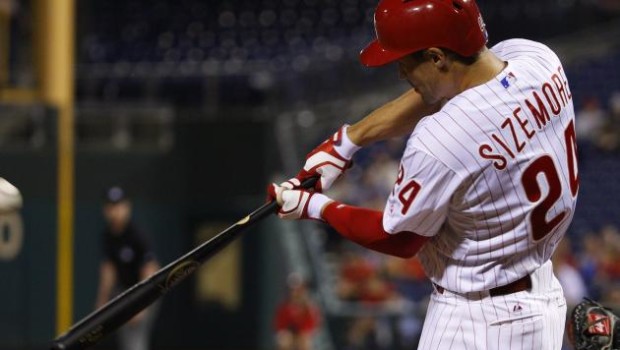 SIZEMORE MAKING HIS CASE FOR A 2015 PHILS ROSTER SPOT

So, why did it take four months for the Phillies to look and play like a contender?

Grady Sizemore hit a pinch-hit, two-run home run with two outs in the sixth inning on Wednesday in an 8-4 victory over the Nationals at Citizens Bank Park.

It gave the Phillies a one-run lead on their way to a three-game sweep as the Phils finished 7-2 on their homestand against the Mariners, Cardinals and Nationals.

“Yeah, just a ball up in the zone and I was able to do something with it,” Sizemore said about the 0-2 curveball from Nationals right-hander Doug Fister.

But what does it all mean? Sizemore is a free agent following the season, but sources have said the Phillies think Sizemore could be part of their 2015 roster. While it would be risky to count on him as an everyday player considering his extensive injury history — he missed much of the 2010-11 seasons and the entire 2012-13 seasons because of injuries — the organization believes Sizemore has value in a potential platoon in left field with Darin Ruf.

“I think everyone wants to play every day,” Sizemore said. “I’ll see what’s out there. Honestly, I’m just trying to finish this year and worry about next year, next year.”

As far as his health, Sizemore said, “Things have been good, real good. I feel strong, feel like I’m getting better and stronger as time goes on, so that’s a good sign. I honestly don’t know what [100 percent healthy] is going to feel like. I don’t know what the limit is or where the ceiling is. I’m just trying to improve and stay strong and build off each day.”

Sizemore saved Phillies right-hander Kyle Kendrick, who allowed seven hits and four runs in six innings. Kendrick, who has allowed at least four runs in each of his last four starts, entered the night with a 4.93 ERA, which was the fourth-highest ERA among 93 qualifying pitchers in baseball.

His first-inning struggles continued. Kendrick allowed a leadoff single to Denard Span, who scored on Anthony Rendon’s double to left field to hand the Nationals a 1-0 lead just two batters into the game. Rendon eventually scored to make it 2-0.

“Jimmy [Rollins] said I might have tipped [my pitches] a little bit, so I changed some things in my glove,” Kendrick said about his first-inning struggles.

The Phillies tied the game in the bottom of the first. Rollins hit his 17th homer of the season, a solo shot that landed in the first row in right field. Chase Utley scored the tying run with help from an error from Span in center field.