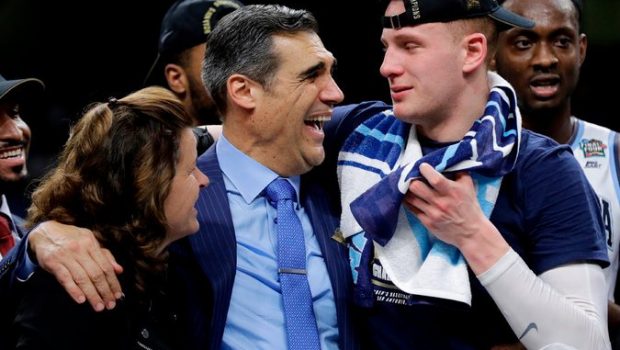 Villanova’s next 8 points were DiVincenzo’s: a 3-pointer, a 3-point play, a jump shot.

DiVincenzo responded to ball screens by hitting long 3s from where he was standing or, once, finding Omari Spellman down low on a brilliant bounce pass.

On defense, during one stretch he forced a driving Zavier Simpson into a miss and then, on the next possession, the 6-foot-5 DiVincenzo straight-up blocked an attempted dunk by Isaiah Livers.

If you’re unfamiliar with the Cats season, you would make the mistake of being surprised by his performance last night.

Another scrappy kid from Villanova’s backyard (he is from Delaware) who thrived in Wright’s system.

But DiVincenzo was a four-star recruit who had offers from Florida, Notre Dame, Syracuse and elsewhere.

The Villanova innovation, rather, is to have a talent like DiVincenzo, as a redshirt sophomore, come off the bench.

“All he wants to do is play,” DiVincenzo’s mother, Kathy, told the New York Times as she watched him being named the Final Four’s most outstanding player. “He doesn’t care if he starts.”

What makes Villanova the class of college basketball — the first team to win two titles in three seasons since Florida repeated more than a decade ago, the second since Kentucky did it in 1996 and ’98 — is this model of sustainable success, with players who could be the center of attention at other big programs sacrificing to play for the Wildcats.

“Donte could do more,” assistant coach George Halcovage said on Sunday, the day before the title game. “He’s a great player. He’s the sixth man. He could be starting on any team in the country.”

Halcovage added, “Understanding being part of something bigger than himself allows him to give us a guy who is a starter off the bench.”

Villanova lost two starters from its title team two seasons ago, and then two more from the team that last season was the NCAA tournament’s No. 1 overall seed. Just three players — Brunson, Bridges and the redshirt junior Phil Booth — contributed major minutes to both championship teams. Brunson is the only player who started for both.

Where was DiVincenzo during the 2016 championship game? “I was on the bench in a suit,” he said.

Part of the way Villanova makes this work is careful attention to what Wright called “roster structuring.” Wright and his staff carry a chart around that projects every player’s next three seasons. Players are considered in their final seasons not based on whether their eligibility is about to run out, but based on when they are likely to leave (like Brunson and Bridges, juniors who are both projected as first-round draft picks). The coaches then recruit to the spots they anticipate having holes in.

They “talk about it every day,” Wright said.

The key to the Cats’ future was echoed in a Wright tweet early this morning: “We play for those who came before us.”