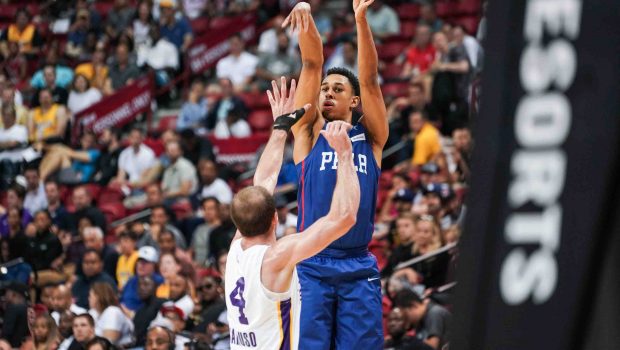 It’s only been 18 days since the Sixers shocked the world by drafting fan fave Mikal Bridges of Villanova and then trading his rights to Phoenix for the rights to Zhaire Smith and a 2021 No. 1.

Sixers Nation was in an uproar.

But now the roar has turned in Smith’s direction!

However, it was clear that there was a different aura of comfort and confidence about Smith compared to the previous night, when he made his summer league debut.

Two minutes into the first quarter, the 19-year old scored his first basket on a nice baseline dunk, which was set up with a savvy jab-step and ball fake. Later on in the period, he canned his first 3-pointer of the summer.

Of Smith’s six baskets, this in-bounds call was by far the most memorable, and was arguably one of the top plays of the first two days of the Vegas summer league.