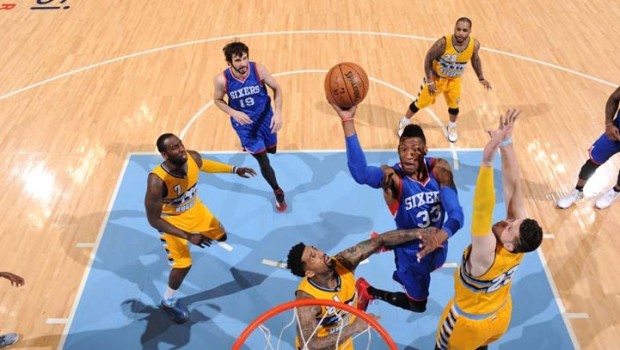 SIXERS’ YOUNG GUNS RISING TO THE OCCASION, TAKE OUT NUGGETS

Remember all those “experts” like Glen Macnow, Ray Didinger, Angelo Cataldi and Dick Jerardi who predicted that the Sixers would be worse than last year, especially when they traded the overrated point Michael Carter-Williams to Milwaukee?

What are they saying now?

(BTW, MCW is shooting 38% from the field and is his old turnover machine self for the Bucks.)

The Sixers are in fact poised for another high pick in the NBA draft. Meanwhile, their young players are showing the future is bright for the struggling franchise.

Rookie Robert Covington (photo above) tied a career high with 25 points and Philly beat the Denver Nuggets 99-85 on Wednesday night.

Nerlens Noel had 14 points, 15 rebounds and four blocks for the 76ers, who swept the season series from the Nuggets.

Ty Lawson scored 19 points and Wilson Chandler had 16 points and 11 rebounds for the Nuggets. Denver was held to nine points in the fourth quarter, which tied a franchise record for fewest points in one period.

”There are some basketball icons rolling over their graves right now, from Philadelphia all the way to Denver,” Nuggets interim coach Melvin Hunt said.

Philly was coming off a one-point loss in Sacramento on Tuesday night but had more jump than the Nuggets. The 76ers hit 14 3-pointers and had 14 steals, four by Noel.

”People have to start talking about him for Rookie of the Year,” Sixers coach Brett Brown said. ”You don’t repetitively bang out these types of performances and produce the numbers he’s producing. He’s a complete game changer. He’s a complete defensive presence when he’s lurking to block shots. He continues to improve.”

Covington, who also tied a career high with six 3-pointers, scored 15 points in a 6:16 span of the third quarter to give Philly a 66-62 lead.

Denver responded with a 14-6 run to end the third. Lawson hit a pair of 3-pointers, the second of which gave the Nuggets a 74-72 lead with 30 seconds left in the third quarter. Denver led by four midway through the fourth when Ish Smith drove in for a layup and Noel’s rebound and layup tied it at 79.

Philly took control from there. Covington, Isaiah Canaan and Hollis Thompson each hit 3-pointers as the 76ers went on 14-2 run in the final five minutes to go ahead 95-83.

”When they keep knocking down 3 after 3, it’s deflating,” Lawson said. ”We never really found a pace to get on.”

Noel clinched the win with a steal and dunk to give Philadelphia a 10-point lead with 1:07 left.

Denver missed five straight shots and had two turnovers in the decisive run by the 76ers.

Noel has been playing well lately. In his last four games the center is averaging 15 points, 11.5 rebounds and 3.8 blocks.

”I’m just playing basketball,” he said. ”My goal is to affect the game any way possible. I just keep it going and come in with that mindset.”