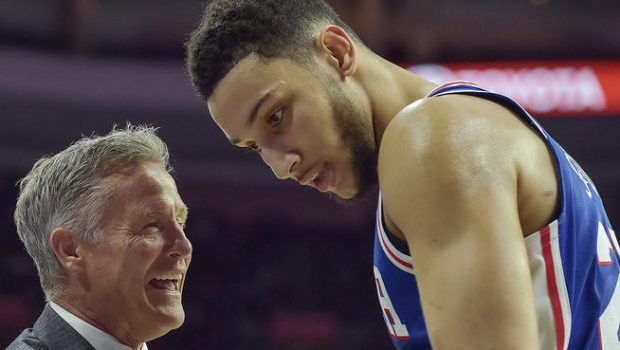 “I’m shocked that we won this game,” 76ers Coach Brett Brown said. “We really didn’t have a right to win the game.”

Simmons was the first rookie to since Magic Johnson in 1980 to have a playoff triple-double, Redick led Philly with 24 points, and the 76ers moved one win from the second round by topping the Miami Heat, 106-102, to take a 3-1 lead in their Eastern Conference first-round series.

“I’m shocked that we won this game,” 76ers Coach Brett Brown said. “We really didn’t have a right to win the game.”

The Sixers turned the ball over 27 times, shot 7 for 31 from 3-point range and trailed by 12 late in the third quarter in an extremely hostile environment against a desperate opponent.

Despite it all, the 76ers were unfazed.

They turned a 10-point deficit into a 7-point lead with a 19-2 run that ended midway through the fourth quarter, then absorbed the best shot Dwyane Wade could throw at the 76ers in the final minutes before heading home with a chance to close out the Heat in Game 5 on Tuesday.

Wade led all scorers with 25 points off the Heat bench, 12 of them in the fourth. But it wasn’t enough.

“They don’t let you off the hook,” Wade said, tipping his cap to the 76ers. “You make one mistake, or you take your foot off the gas for one second, they make you pay.”

Wade doesn’t have a contract for next season. He has said if he plays, he’ll be back with Miami — though there are no guarantees.

“I’m focused on the next game, trying to win that one,” Wade said.

Simmons’s triple-double consisted of 17 points, 13 rebounds and 10 assists. Embiid finished with 14 points and 12 rebounds for Philadelphia.