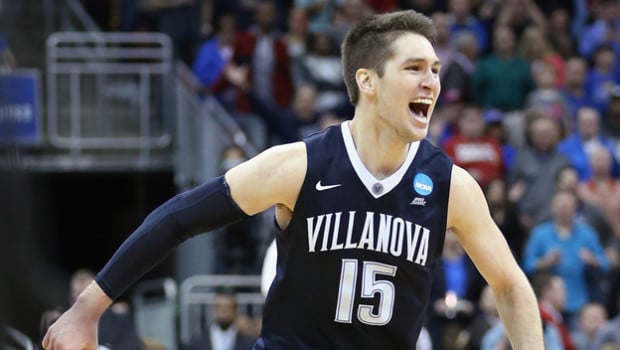 SIXERS WILL WORK OUT VILLANOVA’S RYAN A., 5 OTHERS TODAY

The NBA draft is only three nights away, and while the Sixers are sure to draft either Ben Simmons or Brandon Ingram with the No. 1 overall pick, they also have the Nos. 24 and 26 picks.

And, they are leaving no stone unturned in their due diligence.

Villanova point guard Ryan Arcidiacono will be among the group of six players they work out today.

We’re all well aware of the 2015 Big East Player of the Year’s resume by now, so let’s take a look at the other five prospects:

Perry Ellis, F, Kansas (6-8/218)
Joining Arcidiacono will be the senior forward Ellis. Ellis and the one-seeded Jayhawks — who were the top seed in the tournament — lost to the Wildcats in the Elite 8.

Ellis was a Wooden Award finalist after finishing his senior campaign with the second-most games played in Big 12 history. He averaged 16.9 points a game on 53 percent shooting during the 2015-16 season. From an advanced statistic standpoint, Ellis has the highest offensive rating of any player in conference history according to College Basketball Reference.

Ellis is sort of a tweener at 6-foot-8. He may not be big enough to bang with NBA bodies at the four but he’s not quick enough to play on the wing. Still, Ellis was considered a strong leader during his time at Kansas and an excellent fundamental basketball player. He may be drafted late in the second round.

Trey Freeman, G, Old Dominion (6-2/177)
Freeman was a prolific scorer during his time at Old Dominion, averaging 22.1 points during his senior season. He scored a career-high 42 points against Western Kentucky in the Conference USA Tournament. At the next level, he’ll have to play point guard given his height. Freeman displayed an ability to facilitate at the Portsmouth Invitational Tournament.

Moss has been on sort of an odd path. He originally was committed to play at Toledo before he was diagnosed with a heart condition. Toledo refused to let him play. From there, Moss went to community college before landing at Buffalo. He was dismissed from the program after it was found that he had stolen money from University of Buffalo football players. Moss has been playing for the Orangeville A’s of the NBL (Canada).

Pascal Siakam, F, New Mexico State (6-10/227)
Siakam is the player with the best chance to be drafted. A native of Cameroon, the lanky power forward was the WAC Player of the Year in 2016, averaging 20.2 points, 11.6 rebounds and 2.2 blocks per game. He shot an impressive 55 percent from the field during his two-year college career.

Much like fellow Cameroon native and Sixers big man Joel Embiid, Siakam grew up playing soccer and discovered the game of basketball somewhat recently. He redshirted initially, giving his 190-pound frame time to mature. He’s a raw prospect but has a lot of physical tools to work with.

Jameel Warney, F, Stony Brook (6-8/259)
Warney is another player that isn’t afraid to bang bodies inside. The three-time AEC Player of the Year averaged 19.8 points, 10.8 rebounds and three blocks last season. The Plainfield, New Jersey native had impressive numbers per 40 minutes during his four-year career: 20.6 points, 12.3 rebounds and 2.7 blocks. He also shot a gaudy 60 percent from the field.