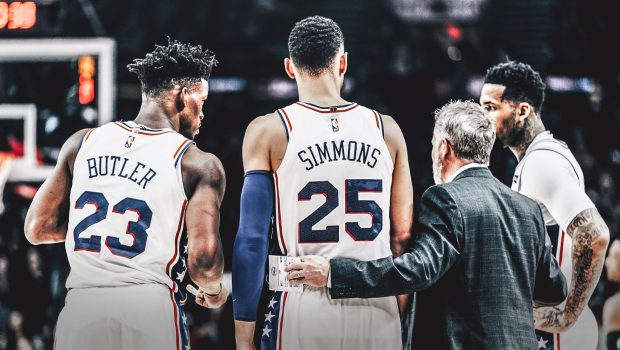 SIXERS WILL SHOOT FOR DEPTH AT NEXT WEEK’S TRADE DEADLINE!

Expect that the Sixers will be among the few buyers before the Feb. 7 NBA trade deadline hits next week.

Coach Brett Brown noted the Sixers won’t pinpoint a certain position or role to target, but know they have to get deeper and better to contend in the East:

“I don’t believe there is any uncertainty,” Brown said, according to ESPN’s Tim Bontemps. “I think, at times, you are trying to move some pieces around. If that equals uncertainty, so be it. But I think there’s enough certainty to understand that we want to be as aggressive as we can. “Elton will be as aggressive as he can be in the next week to bolster our team. And I think that that is, as I’ve just said, that doesn’t equate to, ‘We don’t really know what we have.’ That’s not it.”

The Sixers have won six of their last eight games, heading into tonight’s game at the red-hot Golden State Warriors, winners of 11 straight games. At 33-18, Philly is a whisker away from the third spot in the East, as the Indiana Pacers trend down after the loss of their leading scorer Victor Oladipo.

“We feel great,” Brown said before his 76ers beat the Lakers at Staples Center. “No matter what happens, we feel good about our base. I think what we all recognize is there’s a belief that we need more. It doesn’t diminish how excited we are about what we have and what we are growing. But we feel that our time is now.

“To better achieve now, depth is the Holy Grail.”