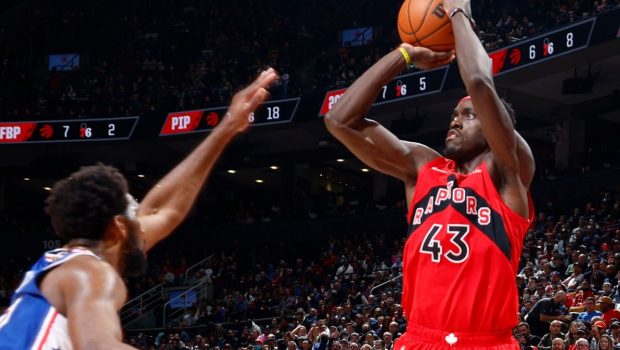 SIXERS WILL LOSE TO RAPS IN 1ST ROUND, JUDGING BY LAST NIGHT!

It’s always dangerous to project what one game means in the endless NBA season.

But last night’s Sixers 119-114 loss at Toronto raises serious questions about how serious we should take Philly’s playoff prospetcs.

But if the season ended today instead of Sunday, the Sixers would be a 4-seed and they would be matched against the Raptors at 5.

And Toronto has Philly’s number.

With Thybulle or not.

“He made some crazy shots,” Rivers said. “When he gets in the paint, he’s so clever.”

Joel Embiid had 30 points and 10 rebounds, and James Harden had 13 points and 15 assists for the 76ers, whose hopes of winning the Atlantic Division title took a hit.

Tyrese Maxey scored 22 points, and Danny Green shot 6 for 7 from 3-point range and scored 18 points for Philadelphia. The Sixers (49-31) remain a half game behind Boston (50-31) after the Celtics lost to Milwaukee.

Toronto is two games behind Philadelphia. Both teams have two games remaining. The Raptors won three of four against the Sixers this season, meaning the Raptors hold the tiebreaker.

Rivers called it a “frustrating loss.”

“Offensively, I thought we lost our rhythm,” Rivers said. “We lost our pace. That’s happened about three times now. We’ve got to keep our pace going.”

The 76ers trailed 106-102 after Green connected from 3 with 3:31 remaining in the fourth quarter, but Trent scored five points as Toronto answered with a 9-5 run. A steal by Siakam led to a driving dunk for Barnes with 1:30 left, putting the Raptors up 115-107.

Philadelphia guard Matisse Thybulle was listed as ‘ineligible to play’ on the official NBA injury report. Thybulle, a defensive specialist, has not said publicly whether he is vaccinated against COVID-19. Unvaccinated foreign nationals are currently prohibited from entering Canada. Limited exemptions to the rule no longer apply to professional athletes.

“Matisse had nothing to do with this game,” Rivers said. “We would have lost the game with Matisse.”

“Of course we miss him,” Maxey said of Thybulle. “Him doing what he does, it’s always great for us.”

Harden agreed, saying Thybulle’s absence for multiple games of potential playoff series against Toronto would be “a huge thing.”

Toronto missed 10 of its first 11 field goal attempts as Philadelphia jumped out to a 17-2 lead. The Sixers were up 33-26 after one quarter.

“We got off to a really good start,” Harden said. “We just didn’t sustain it for the entire game.”

Siakam scored 15 points in the third and Trent added nine to give the Raptors an 87-85 lead after three quarters.