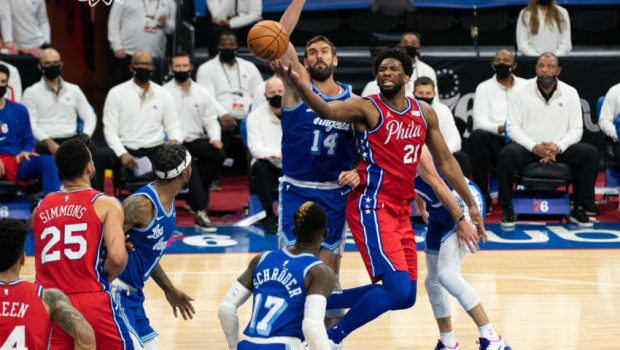 SIXERS WERE LAST MAN STANDING IN AN NBA HEAVYWEIGHT FIGHT!

It was only January 26 in a long NBA season.

But last night’s Sixers 107-106 win over the Lakers at the Wells had all the trappings of a heavyweight fight.

Tobias Harris swished a jumper with 3 seconds left, sending Philly to a 107-106 victory.

A LeBron James-Joel Embiid flagrant was the cherry on top in a game between teams that entered with the best records in their conferences. The 76ers lead the East at 13-6 and the Lakers are 14-5 in the West.

“Some people think we haven’t played anybody,” Harris said. “For us, we wanted to go against the champs. We wanted to see where we’re at.”

Harris saved the Sixers on a shot over Alex Caruso.

James scored 34 points and Davis had 23.

“It didn’t go our way but I loved our fight,” James said.

Embiid, the All-Star center off to the best start of his career, drove down the baseline for an attempted right-handed dunk when James pushed him in flight. Embiid crashed hard on his tailbone, immediately grabbed his back and writhed on the court in pain as James simply looked down and walked past him. After a short video review, James was hit with a flagrant 1 — “unnecessary contact committed by a player against an opponent” — and Embiid sank both free throws.

Embiid was quickly hit with his own flagrant when his elbow connected with Davis’ face on a drive to bucket.

Embiid has a history of back issues and sat out Monday’s loss at Detroit with back tightness. He sat alone on a cool-down seat behind the basket for nearly the first 5 minutes of the fourth quarter. Embiid returned and threw his hands in the air in celebration when he buried a shot that gave the Sixers a 10-point lead.

Embiid said James’ foul should have been a flagrant 2 — an automatic ejection.

“Clearly, he wasn’t the same after that as far as his movement,” coach Doc Rivers said.

The Lakers suffered their first road loss of the season in 11 games.