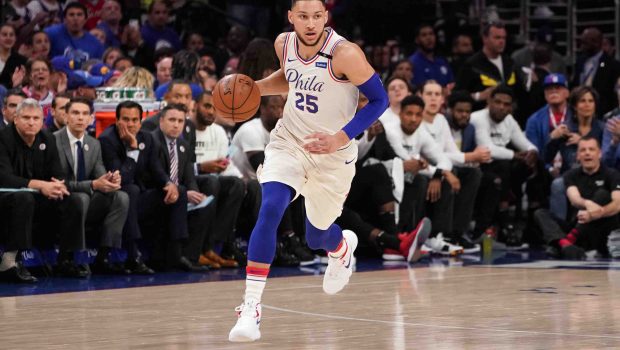 HOW THE SIXERS WENT FROM A 10-WIN DUMPSTER FIRE TO NBA TITLE CONTENDERS IN 2 YEARS!

We are witnessing the Sixers in the middle of a growth spurt unlike anything we’ve seen in recent history.

The Process started in 2012 and head coach Brett Brown laid down the foundation right away. The commitment to player development and a certain style of play has been there from Day 1. The draft picks piled up and the young talent eventually got healthy. The Sixers took a big jump last season with Joel Embiid playing just 31 games and an even bigger jump this season with a healthy Embiid and a Rookie of the Year campaign from Ben Simmons.

But what we’ve seen in the last two and 1/2 months is remarkable. This team has quickly gone from average to the most complete team in the Eastern Conference.

On Feb. 6, the Sixers were 25-25 and in eighth place in the East. They ranked fourth in the league in defensive efficiency and fifth in the conference in point differential, but were .500 because they weren’t great in close games. In fact, they were the worst fourth-quarter team in the league by a pretty wide margin and had lost six of the 23 games they had led by at least 15 points. They were great early in games, but couldn’t close.

Eleven weeks later, the Sixers have closed out their first-round series with the Miami Heat on their first try, grinding through an ugly first 24 minutes and putting the Heat away with a 58-45 second half to earn a 104-91, Game 5 victory and a trip to the conference semifinals, where they will meet the Boston Celtics or the Milwaukee Bucks.

We knew that the Sixers had the talent to win a playoff series. Simmons and Embiid are transcendent players.

“This is the future of the NBA,” Dwyane Wade said.

We knew they had the size to win a playoff series. J.J. Redick is their only starter under 6-9.

The Sixers have an elite defense and they have an offense that is tough to guard. They just never stop moving.

The question was how they’d deal with the pressure of finishing off a resilient opponent. Before Game 5, Brown wasn’t concerned with Xs and Os. He wanted to see how his team handled the opportunity to close out the series.

“There is a discipline, a maturity that we need to have that might contradict some of their resumes,” he said. “But we need that. That’s what you need in a close-out game. That overarching notion is what interests me more than the minutia of little details with offense or defense.”

Brown got what he wanted. The game wasn’t pretty; The Sixers shot 5-for-26 from outside the restricted area in the first half and made just seven threes (on 28 or more attempts) for the third time in the last four games. But they defended well and were at their best in the second half, because they have learned how to close.

“You have high-level talent with [Simmons and Embiid],” Heat coach Erik Spoelstra said. “Their poise, to be able to tap into that talent, belies their years. That’s impressive to be able to do that in a playoff setting.”

Over the course of the five-game series, the Sixers outscored the Heat by 37 points in the third quarter and by 41 in the fourth. That problem with closing games is long gone.

The Sixers have won 20 of their last 21 games. They’ve been dominant at home since Jan. 1, but they also won the first two road playoff games that four of their five starters have ever played in. They came back from 17 points down in the second half of Game 4 in Miami.

This team has come a long way in the last 11 weeks, further than any of them could have imagined.

“It’s caught us off guard,” Brown admitted. “There is no doubt about that.”

Now? Who knows. This team is really good on both ends of the floor, and this growth spurt might not be over, because the Sixers have had Embiid back for just three games, he’s still getting used to the mask he’s wearing to protect his face, and his offense hasn’t quite returned to form.

“I feel like there’s no team that has more chance for upside than we do,” Brown said, “because of the youth, because we haven’t had Joel for three weeks.

“The longer we survive, the longer we can stay in this, I see an upside here that we can go to a higher level of play. And I get really excited about that.”

They’ve reached all those goals they set out for themselves and there’s more to come. They’re the first Eastern Conference team to win its playoff series, and no team in either conference has played better over the last month.

The Sixers aren’t just the future of the NBA. They’re the present.

“We don’t feel any sense of complacency,” Redick said. “We’re not satisfied. This group is still hungry. We want more.”