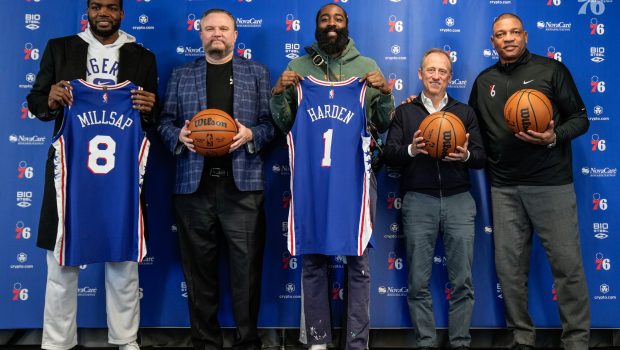 SIXERS ‘WELL-POSITIONED TO GO ON A RUN,’ DARYL MOREY SAYS

In this case, James Harden, and they rolled out him and Paul Millsap yesterday.

“Doc [Rivers] and the coaching staff and the players have put us in a spot where, as we make this trade, we are well-positioned to go on a run — and a run that hopefully excites the city of Philadelphia,” Morey said. ” … We wanted to give up nothing. But you have to give up something to make a trade and get a Hall of Famer and a player that can put us into a different tier of competing. We’re very comfortable.”

“… If we could have gotten a deal done [immediately after Simmons’ agent, Rich Paul, asked for a trade], we would have done it then.” Yet Morey remained steadfast that he would hold out for appropriate value in return. Before the Harden possibility began rumbling in recent weeks, Morey said during radio interviews that he was content to wait until the offseason — or even the four seasons remaining on Simmons’ max contract.

“The way this league works, you have to get players the caliber of a James Harden to pair with a Joel Embiid and a Tobias,” Morey said. “You can win without it. But you look historically in the league, you’re looking at pretty long odds if you don’t have two great players of that level of play out there.”