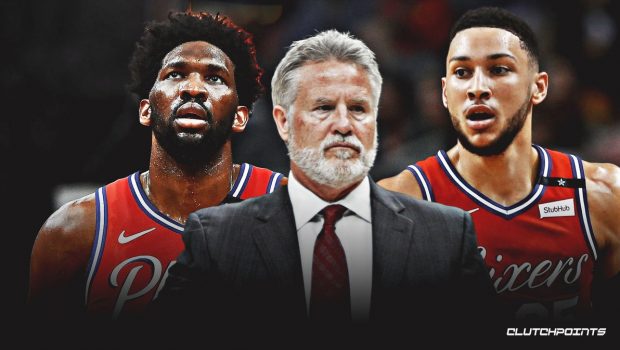 Okay, it’s the All-Star break, and the Sixers have somewhat righted their ship with a quality win last week over the elite LA Clippers.

So, the talk of trading Joel Embiid and Ben Simmons has disappeared, except on the outer reaches of Howard Eskin’s mind.

However, according to Kurt Helin of NBC Sports, coach Brett Brown is definitely in danger:

“Sources I have spoken to around the league painted this picture (and [ESPN’s Brian] Windhorst mentions it): It’s too hard to get two elite players, trading one (and certainly not getting full value back) is the absolute last resort,” wrote Helin. “The more likely pattern is Brett Brown gets fired after the season and another coach is brought in. However, if in a year or two that coach cannot get Embiid and Simmons to blend at a championship level, then the Sixers will start to explore trades. (Both players are under contract for three seasons after this one, there is no pressure to trade or lose them on the Sixers.)”

Both Howard Beck of Bleacher Report and Windhorst agree:

“There are plenty of people around the league who believe this is it, these are the final days of Embiid and Simmons together,” said Beck in his podcast The Full 48.

“One of the conversations people are starting to have in the league is ‘will they move Embiid? What’s the price? Where would he go?’ I’m not going to get into that, but my point is people are talking about that.”