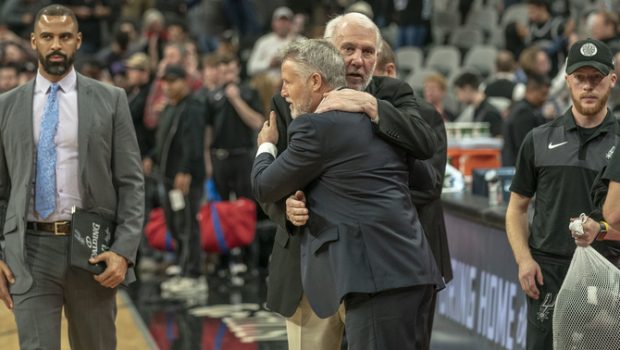 ESPN’s Woj is reporting that Brett Brown is returning to the San Antonio Spurs to rejoin Gregg Popovich’s staff as an assistant coach.

He will fill the void created by Becky Hammon, who left the Spurs earlier this year to become the head coach of the Las Vegas Aces in the WNBA.

Brown was on Popovich’s staff from the 2006-07 through 2012-13 seasons before becoming the Sixers head coach.

Brown shepherded the 76ers through the “The Process” in which the franchise tanked to improve its draft position and eventually into Eastern Conference playoff contention. He was fired by the 76ers in 2020 after seven seasons in which he had a 221-344 record.

He first joined the Spurs in the 1998-99 season as an intern but left the organization after the 1999-2000 season to become the head coach of the Sydney Kings of the Australian National Basketball League. He rejoined the Spurs in 2002 as assistant coach/director of player development and is credited with bringing franchise icon Manu Ginobili over from Europe. He moved to the bench as an assistant under Popovich in 2006.