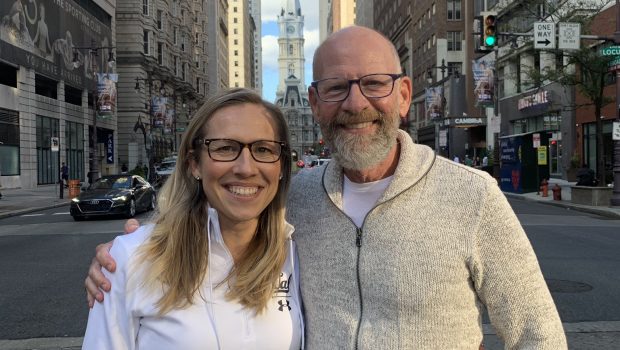 SIXERS VOICE TORCH HAS BEEN PASSED FROM ZOO TO KATE SCOTT!

Kate Scott has been hired to replace Marc Zumoff as the Sixers TV voice.

That made history, because no woman has ever handled play-by-play in sports-crazy Philly.

And Scott has lots of experience in the history department, says the San Jose Mercury-News:

Still, she admits to having experienced a mad rush of amped-up emotions when she learned two weeks ago that she would head up an all-female radio broadcast crew for a Warriors game against the Chicago Bulls in March.

In celebration of Women’s History Month, Scott will become the first woman to handle play-by-play duties for a Warriors broadcast as Golden State takes on Chicago at the Chase Center. Stepping in for longtime play-by-play man Tim Roye, she will be part of a crew that includes analyst Mary Murphy, along with Kerith Burke and Chiney Ogwumike, both of whom will handle the pre- and post-game show duties.

Scott, who co-hosts 95.7 The Game’s “The Morning Roast” with Bonta Hill and Joe Shasky, has been calling college basketball games for several years, but has never done an NBA contest. Her resume, however, is dotted with plenty of trailblazing experience. Last year, for example, the UC Berkeley grad teamed with 29 other women to help NBC Sports produce the first all-female NHL broadcast on U.S. airwaves.