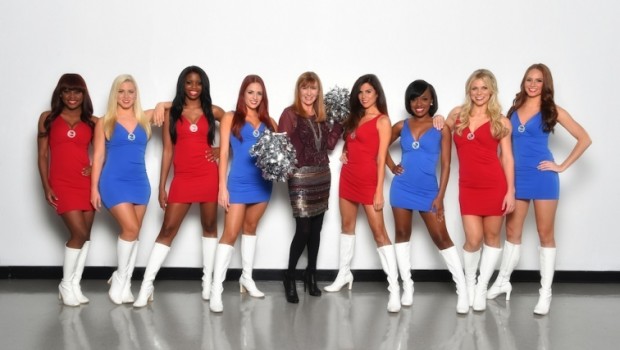 Nicole Miller’s design will be the Sixers’ center of attention (she’s in the center) until MCW (below) returns.

On a day the Sixers made their biggest news of the preseason by rolling out their dance team in outfits designed by none other than Nicole Miller — I wonder if she can drain a 3! — there was another promising sign. When Michael Carter-Williams had shoulder surgery this offseason, he was given a timeline that meant he’d miss 5-50 games this season.

The Sixers point guard is trying to keep that diagnosis on the low end.

Michael Carter-Williams and the Philadelphia 76ers have set a target date of Nov. 13 for his return, a source close to the situation told ESPN.com.

Philly plays Dallas that day in its eighth game of the season.

You can be sure the tanking 76ers will be as cautious as possible, especially now that the NBA will keep the same lottery format for this season. There’s a chance Carter-Williams, the reigning rookie of the year and team’s top player, helps Philly win – which would counteract its short-term goals.

More importantly, as long as winning is not a focus, the Sixers will want to ensure Carter-Williams fully heals. There’s no sense letting this injury become a long-term concern if a little extra rest now would help.