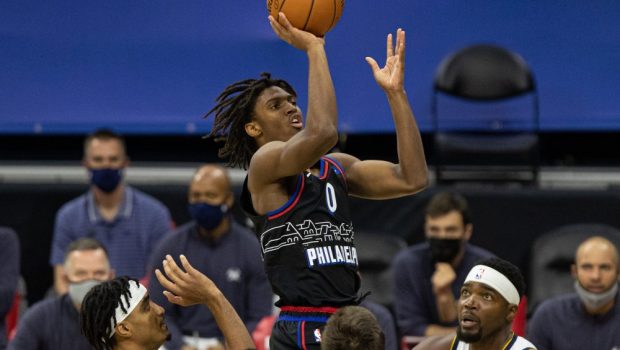 SIXERS TYRESE MAXEY IN THE ROOKIE OF THE YEAR CONVO!

Sixers rook guard Tyrese Maxey has averaged 19.4 points and shot 48.9% from the floor in his past five games.

In the latest Rookie Power Rankings performed by CBS, Maxey comes in at number 1 on the list after his terrific play as of late:

Maxey was put in a precarious situation this past week, as the Sixers pushed him into the starting lineup after Philadelphia had several key players like Tobias Harris who were sidelined due to the league’s health and safety protocols.

He not only handled the challenge well, but he shattered expectations. In the loss to Denver, in which Philadelphia was without Ben Simmons, Joel Embiid, Harris and several other key players, Maxey put up a ridiculous 39 points in his first career start.

It helps that he was playing against Denver, which ranks 24th in the league in defensive rating, still though, he was making and taking some tough shots. He was going right at the defense, and finishing around the rim. He looked straight up surgical with how he was cutting through the Nuggets defense, and coupled that with several tough jumpers. It’s no wonder Philly didn’t want to include him in a deal for James Harden, this kid is tough.