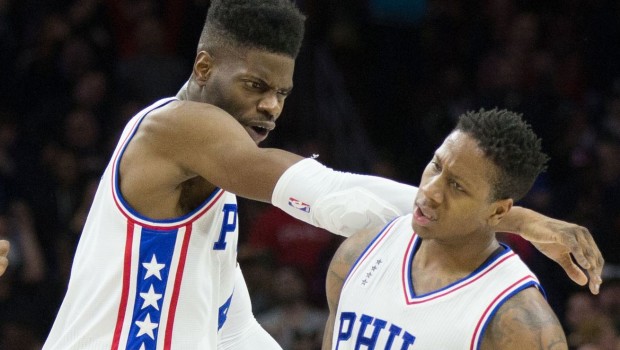 With the NBA trade deadline approaching, lots of local media bubbleheads have suggested that since Jahlil Okafor and Nerlens Noel can’t play together as Sixer bigs one has to go.

In the 103-98 victory over the Brooklyn Nets last night at the Wells, Okafor and Noel (above left) thrived in altered roles. Okafor, the rookie center, played the four-spot on defense while Noel, the rim protector, played the five on defense.

The result was what many had hoped for when the Sixers drafted Okafor last June to go alongside Noel.

“We’re always in a fistfight with [Brooklyn] and we needed [Okafor and Noel] to get some separation,” Brown said.

Okafor pulled down a career-high 17 rebounds — seven of them on the offensive glass — to go with a game-high 22 points. Noel notched 18 points to go with four steals and three blocks as the Sixers picked up just their second win this season without Ish Smith in the lineup.