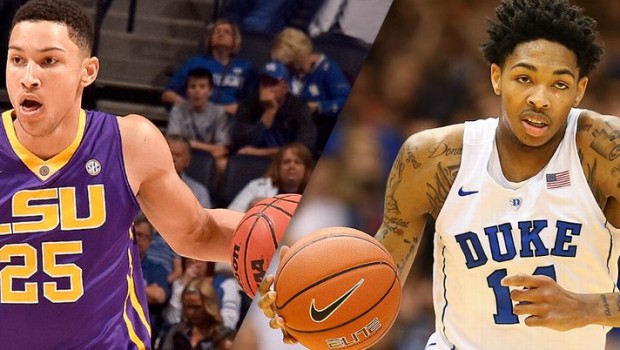 Now that the Sixers have been awarded the No. 1 overall pick via the NBA draft lottery, they have a decision to make before the June 23 draft:

For much of the 2015-16 college basketball season, Simmons was the presumptive top pick. But in recent months, Ingram has climbed up some mock draft ladders to the top spot.

Here’s a look at the two one-and-done standouts:

A look at Simmons’s stats as a Tiger.

At a glance: Simmons averaged 19.2 points and 11.8 rebounds in 33 games for the Tigers last season. He was named the National Freshman of the Year and the Southeastern Conference Freshman of the Year. He had the fifth-most double-doubles in the country and was thought by many to be the No. 1 overall pick much of the season.

What the scouts say: “He also shows some ability to score inside the post with right-handed jump hooks and excellent footwork,” wrote DraftExpress’s Jonathan Givony. “He is devastating operating in isolation situations from the mid-post area as he’s simply too quick and too creative with the ball for most big men to stay in front of.”

Though he dazzled at some points, Simmons’s effort was called into question at times, especially in the Tigers’ final game, a 71-38 drubbing by Texas A&M. LSU was 19-14 with Simmons, making projections that he’s a lock as the top pick questionable. His defensive effort in particular has been questioned.

“He often looks very lazy here, not making any effort whatsoever to close out on shooters and avoiding contact and physicality in a very concerning way when challenged by opposing players,” Givony wrote.

Though he averaged a double-double, his jump-shooting has major room to improve.

“Simmons lived around the rim in college, taking 54.4 percent of his shots from close range, per Hoop-Math.com,” wrote Hoops Habit’s Nathan Grubel. “He also took a lot of mid-range shots, but only converted on 32.9 percent of those looks. All season long, he only attempted three shots from behind the three-point line and converted on one of them.”

A look at Ingram’s stats as a Blue Devil.

At a glance: Ingram has been compared to Oklahoma City’s Kevin Durant after a freshman campaign that saw him average 17.3 points. Ingram, who has already been interviewed by the Celtics, according to a Globe source, was a finalist for Freshman of the Year and Small Forward of the Year. He was named second-team All-ACC and earned ACC Freshman of the Year honors. Because of questions surrounding Simmons, Ingram has a real shot at going first overall.

What the scouts say: “Ingram is a better shooter — which is perhaps the most important skill in today’s NBA — and has shown a much better trajectory throughout the college season,” Givony wrote for Yahoo!’s The Vertical. “The intel on Ingram as a teammate and competitor has been much stronger than Simmons’. Yes, Ingram has a much more frail frame now, but it’s easy to envision him filling out as he ages and matures.”

It seems Ingram’s versatility and length appeal to teams, especially as the league continues to evolve.

“He’s what teams are looking for right now, from a standpoint of how the game is becoming more position-less and focused on versatile skill sets,” an NBA front-office member told Sports Illustrated. “You can see it in the playoffs right now: Teams are cross-matching defensively, and the record for threes in a playoff game gets broken [by the Cavaliers]. . . . Ingram walks in the door with that combination of wingspan, shooting and ballhandling, so until the [NBA] trend shifts to something else, there’s not going to be an issue with him fitting in.”

“Aside from being tall and long, Ingram is one of the better 3-point shooters in this draft class,” wrote Hoops Habit’s Maxwell Ogden. “He shot 41.0 percent from beyond the arc, which came on a very healthy sample size of 80 3-point field goals made.”