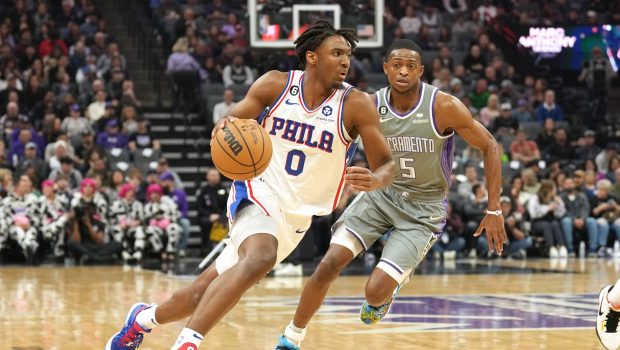 SIXERS TO THE MAX: TYRESE LEADS WIN AT KINGS WITH NO JO, HARDEN!

Tyrese Maxey scored 15 of his 32 points in the third quarter and the Sixers, playing without Joel Embiid and James Harden, completed a perfect five-game road trip by beating the Sacramento Kings 129-127.

Maxey also had seven assists and six rebounds to help the 76ers overcome a 21-point deficit.

Tobias Harris, Montrezl Harrell and Georges Niang all had 17 points for the Sixers.

“That was a resilient win by our guys,” 76ers coach Doc Rivers said. “Everyone who played did something to help us win tonight. It’s a team win.”

“They have some good players,” Huerter said. “This is a team that, when healthy, you can put against anyone in the East.”

The 76ers surged back to tie the game at 86 on a three-point play by Harrell with 6:59 left in the third quarter. The Kings regained the lead when Barnes scored the next five points but the 76ers mounted a 16-5 run to end the quarter with a 102-96 lead.

Maxey scored 12 of the 76ers’ first 16 points in the third quarter.

“I was telling them (76ers) I was gonna come out aggressive in the third,” Maxey said. “I think in the first and third quarter I was letting them (Kings) dictate what shots that I was taking. (In the third), I dictated what we needed. I think I did that for most part of the third quarter.”