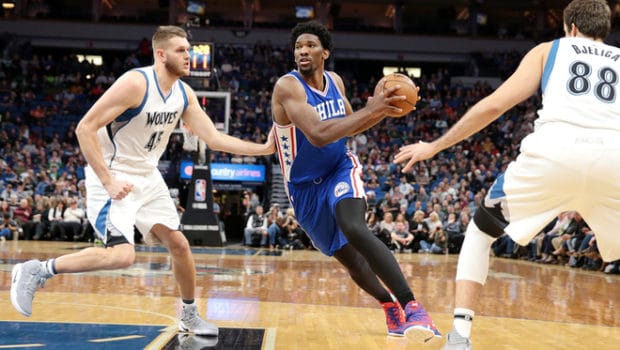 SIXERS TEEING UP THEIR 1ST MEANINGFUL SEASON SINCE 2012!

As the Sixers prepare to go to training camp this month and start their first meaningful season in five years, here’s why they have created a buzz in this basketball-crazy town:

It’s the combination of Embiid in the middle and those kinds of defenders down low. When you’re able to show effectively on the perimeter, and recover inside like this, having Embiid cleans up a whole lot.

Embiid’s ability means that defenders always have that help behind them, which helps them be more aggressive. So much of individual perimeter defense is built upon a. understanding how to approach the specific opponent (push him left vs. right) and being able to trust your help defenders in the event you get beat.

Here’s why this is important, and how the Sixers could build their defense. Both Simmons and Fultz are hyper-athletic, aggressive defenders. With young guys, teams usually take one of two approaches: they will play back and try to make things as simple as possible to reduce mistakes or unleash them to take chances in the hopes of creating chaos since young, athletic players are always going to be better in the open court than in the half-court.

Fultz averaged 1.6 steals per game last year with Washington, Simmons averaged 2.0 steals per game in 2016 with LSU. Combine this kind of aggressive defense with knowing Embiid is behind you.

The Sixers were 10th last season in points off turnovers, 17th in overall defense. With a team that young, trying to limit mistakes and play sound defense may only exacerbate the issues. But if instead they take an aggressive approach, playing passing lanes, hedging or blitzing in pick-and-rolls, they can be really effective, even if mistake prone.

Will coach Brett Brown let them? The Sixers were third last season in deflections, so there’s a good chance he will let them be aggressive on the perimeter.

And that’s going to help their offense, which they’re going to need.

Simmons and Fultz have to help with that. Neither were great in summer league action, but with their size and athleticism, they should be able to create a little mayhem in the open floor with their vision and size. But the player who might actually help the Sixers’ transition offense the most?

Redick was in the 84th percentile in points per possession in transition last season. His ability to spot-up and knock down shots off imperfect passes, sometimes while drifting to the corner is going to do wonders for Simmons and Fultz. If they can’t power their way to the rim, Redick will always be there spotting up as a safety net.

The plan, according to the Sixers, is for Ben Simmons to play point guard and Fultz to operate as a kind of hybrid combo-guard, but primarily off-ball to start the season. Fultz shot a good 23 of 60 on catch-and-shoot situations last year, via Synergy Sports. But this puts a lot of control in Simmons’ hands. Simmons is athletic and strong, with incredible vision, it’s why he was the No. 1 option. But putting the ball in his hands full-time may limit Embiid’s effectiveness and Fultz’s confidence. Conversely, using Simmons as the screen-and-roll man with Fultz as the ball-handler gives Fultz the maximum number of options, with a post-up to Embiid as a reasonable reset, and Redick providing spacing.

Additionally, Robert Covington was in the 39th percentile on spot-up plays and took a huge step back from 3-point range. Rookie-of-the-year runner-up Dario Saric was in the 31st percentile, shooting 38 percent. Redick helps the spacing but if Fultz has what are pretty typical shooting struggles as a rookie, teams stay tethered to Redick, and Simmons’ poor shooting reputation bears out, Philly’s going to have a hard time scoring, especially in any situation when Embiid’s not on the floor.

With a model built to take advantage of opponent mistakes and weaknesses, Philly should struggle against the great teams that take them seriously, but their win percentage against those other teams should improve substantially.

Injuries are obviously the biggest question on everyone’s mind, but there are other ways this could go haywire. If they can’t find a way to disrupt the perimeter, and if the defense can’t hold with gambling if Embiid’s not on the floor to clean things up, and if the transition offense continues to sputter, they could disappoint.

But there’s enough talent there to get them started, and from there, the Sixers can work on finding their identity and shifting to whatever strengths they find. After all, that’s the best thing about the Sixers. With a squad this young and talented, we don’t even know what they are yet.