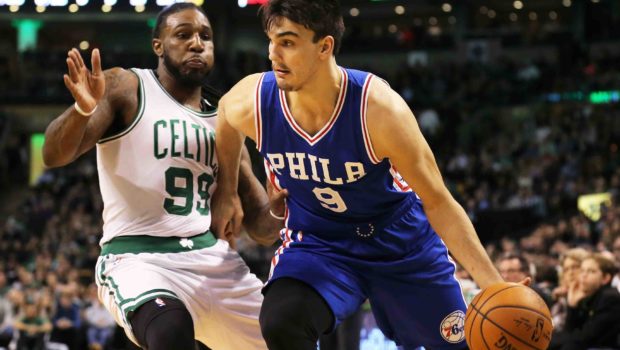 Sixer rook Dario Saric has put up good numbers in three appearances against the Celts this season, averaging 16.3 points and 9.3 rebounds per game. Two of his four 20-point, 10-rebound showings this year have come at Boston’s expense.

Winners of three straight, the Boston Celtics show up to play the Sixers today at the Wells as one of the hottest teams in the East.

They have applied increasing pressure on Cleveland for the first-place perch in the Eastern Conference standings. Just prior to the start of this latest streak, the Celtics got themselves going with an impressive road victory over Golden State, 99-86, last Wednesday.

Arguably the most significant individual driving force behind Boston’s success this season, Isaiah Thomas – an All-Star the last two years, and the NBA’s third-leading scorer – will be missing in action today, as was also the case in Friday’s victory at Brooklyn. The 5-foot-9, 185-pound point guard is recovering from a bone bruise in his right knee. Third-year Oklahoma State product Marcus Smart started in Thomas’ place against the Nets.

Boston has enjoyed a successful turnaround under Brad Stevens. He’s on-pace to increase the Celtics’ win total for a fourth straight season since getting hired in 2013, and deliver for Boston its first Atlantic Division crown since the 2011-2012 campaign.

Boston’s 11-game winning streak is its second-longest ever versus the Sixers. The Celtics compiled a string of 20 consecutive victories over the Sixers back in the early 1970s.