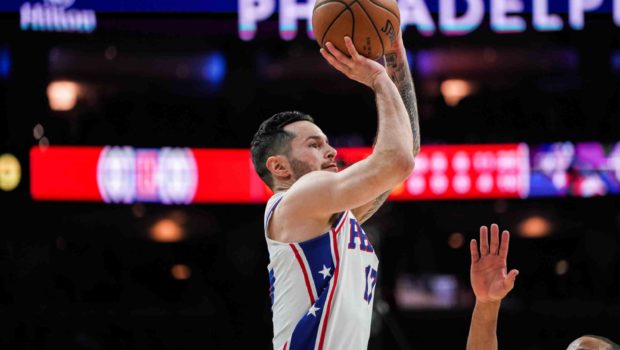 HOW THE SIXERS ARE STRETCHING THE COURT: 4-POINT LINE!

It turns out the Sixers believe so much in the power of 3-point shooting that a 3-point line wasn’t enough for them. Which is why they added a 4-point line.

There is no such thing as a 4-point line in the NBA. Except in Philly. What they call a 4-point line, the light gray semi-circle exactly five feet behind the traditional white line in their training complex, is such an essential part of the Sixers’ unlikely success this season that when coach Brett Brown was asked to explain its origins he invited a reporter into his office and took a seat.

It helps to begin at the beginning. And the most important thing to understand about the Sixers is that before they were very good they were very, very bad.

They endured four long years of tanking in the hopes that it would make them a title contender for many years to come, and they were rewarded for their patience when they drafted Ben Simmons and Joel Embiid, who are young, generational talents worth rebuilding around.

But even when their record was putrid, their style was promising. They played fast, passed more than any team in the NBA and shot a whole bunch of 3-pointers. It was a basketball philosophy that Brown, who spent more than a decade with Gregg Popovich in San Antonio, drilled into his teams during their endless parade of losing, because he knew it had to be their blueprint once the Sixers were finally ready to start winning.

“When you look at modern-day offense, and you try to play a style that I believe in and have for a while,” Brown said, “you have to space the floor, you have to shoot threes and you have to create room.”

Which is why the 4-point line exists in Philly.

“We want to take it to a higher level and space further,” Brown said. “We want to stretch the court more.”