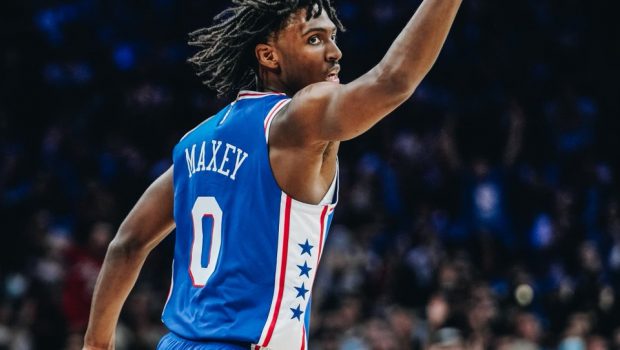 SIXERS STREAK-BREAKING LOSS SHOWS HOW MUCH THEY MISS MAXEY!

At last, the Sixers lost after winning eight straight.

In a game that showed how much they have missed star guard Tyrese Maxey.

The Wizards withstood a 48-point effort by Joel Embiid and a 26-point, 13-assist performance by James Harden. Washington has rebounded from a 10-game losing streak by winning three of its last four, with victories over Phoenix, Sacramento and Philadelphia.

“That’s a good team. They’re better than what their record says,” Embiid said.

“But that’s not an excuse to lose against them. We just didn’t have it tonight.”

The 76ers cut a 16-point deficit to one late in the game but couldn’t overtake Washington. There were some ugly shot attempts by the Wizards without Beal on the floor, but they made enough plays defensively to hold on.

Embiid cut the lead to one when he threw down an alley-oop dunk from Harden, but Porzingis made a 3-pointer to make it 111-107. With 2:05 remaining, Embiid missed the first of two free throws — his only miss in 14 attempts from the line.

With the score 111-108, Embiid fell while driving and lost the ball out of bounds with 1:29 to play. About a minute later he again had the ball down three, and this time Washington’s Deni Avdija reached in and knocked it away.