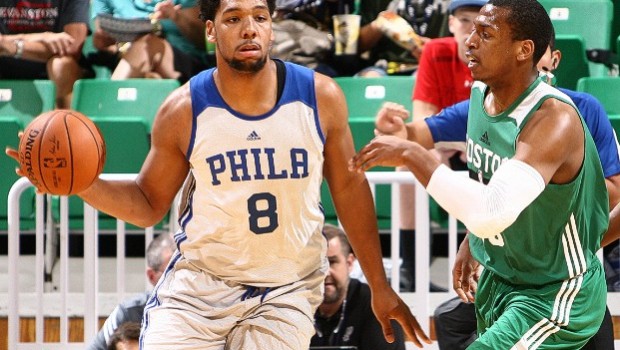 So, the Sixers got a win Tuesday night against the dreaded Boston Celtics in the Salt Lake City NBA Summer League, coming alive in the second half, outscoring the Celtics 49-36 after halftime for a 76-62 win.

The Sixers are now 1-1 at the Utah Jazz Summer League, while the Celtics dropped to 0-2.

Jahlil Okafor, Richaun Holmes and Jordan McRae each scored a team-high 13 points for the Sixers, and Jerami Grant shook off Monday’s shooting woes to score 12 points (on 4-for-4 shooting) in only 18 minutes.

Okafor was strong in the second half for the second straight game, scoring eight of his 13 points in the final 20 minutes.

Terry Rozier finished with a game-high 14 points for Boston, while C.J. Fair (10 points) was the only other Celtic in double figures. Boston played without point guard Marcus Smart, who scored a tournament-high 26 points on Monday night.

Philly went on a 14-6 run early in the third quarter behind Furkan Aldemir, who scored eight straight points (on two 3-pointers and a dunk) as the Sixers extended their lead from one to nine. The Celtics were never able to get back within striking distance.

The Sixers’ front line of Okafor, Aldemir and Holmes was too much for Boston to handle. The trio combined for 37 points, 31 rebounds and five blocks, and they led the Sixers to a 55-35 rebounding advantage.

Aldemir filled up the box score with 11 points, a game-high 14 rebounds and three blocks (and six fouls). Holmes hit a 3-pointer from the top of the key, threw down two powerful dunks and contested just about every shot at the rim on defense (blocking two).