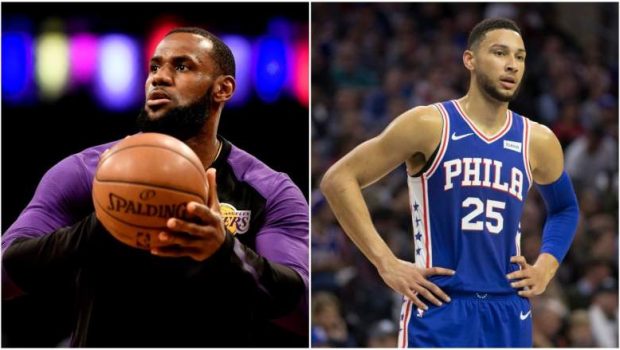 Sixers coach Brett Brown has lately been marketing Ben Simmons as one the best defenders in the NBA, if not the best.

Well, he can make that case for himself tonight when the Lakers and LeBron James come to the Wells and Benny will be tasked with stopping him.

They’ll be without All-Star center Joel Embiid for a ninth consecutive game because of a torn ligament on his left hand. Embiid, however, practiced yesterday for the first time since undergoing surgery and hopes to return next week.

In addition to the absence of Embiid, guard Josh Richardson will also be out with a left hamstring strain.

The Sixers were on a four-game winning streak but lost in Toronto for the 15th straight time in the regular season in a 107-95 defeat on Wednesday.

Tobias Harris led the way with 22 points, but struggled down the stretch.

“We turned the ball over a couple of times in that (late) stretch, which led to them getting out in transition,” Harris said. “On our part, we didn’t get good offensive execution on getting up good shots and good looks that we needed. It’s something that we’ve got to get better at.”

With a revamped roster, the Sixers launched 46 shots from beyond the arc, making 18. Playing again without two key starters, the Sixers will likely continue to become a perimeter-oriented team.

“It was one of our most efficient ways to score,” Sixers head coach Brett Brown said.

The Lakers arrive fresh off a 128-113 win on the road against the Brooklyn Nets on Thursday.