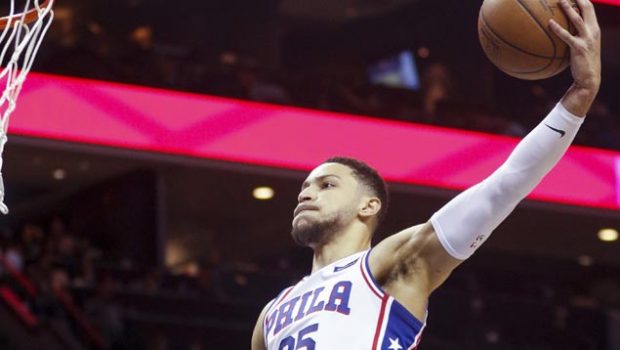 Ben Simmons and the visiting Sixers posted their 10th straight victory for their longest winning string since 2003, beating the Charlotte Hornets 119-102.

The Sixers set a team record with their ninth straight game of 30 or more assists — they had 36 on their 48 baskets.

“We’re having fun on the court and that’s really important for us,” said reserve guard Marco Belinelli, who led Philly with 22 points on 9-for-10 shooting. “For sure, we miss Joel out there on defense. But we know that everybody needs to step up and be aggressive on offense and defense and just play together.”

Embiid suffered an orbital fracture of his left eye last week and underwent surgery on Saturday. His projected return is as soon as two weeks, right about the time the Sixers would open the playoffs.

“You’re in the NBA current that pulls you along in good ways and sometimes it can suck you out to sea,” said Sixers coach Brett Brown, whose team remained in fourth place of a tight Eastern Conference race. “It’s a violent thing you go through and it’s just never-ending. We’re in a good current right now. So that moves us along. We want more and we know we always have to play better defense and bide time without Joel.”

“We owe it to him to do whatever we can to let him play with his team — our team — wherever we can. And we see the path to doing that is fighting like heck to get a home-court advantage. We feel like we can control our own destiny if we’re able to do that, which allows us to give ourselves a chance to re-introduce him to the team,” he said.

The Sixers led 68-55 early in the second half. After the Hornets went on a 16-3 surge to get within 72-71 midway through the third quarter, the 76ers scored 14 straight points to pull away.