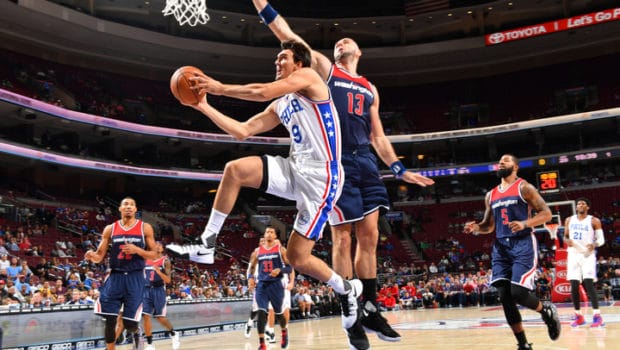 SIXERS ARE SIMMONS-LESS: DARIO SARIC IS THE UPSIDE!

Okay, the Sixers have played a couple of preseason games, winning in Boston and losing to the Wiz Thursday night.

So, what are we to make of the Ben Simmons-less Sixers?

With Simmons sidelined, 2016 will be the fifth year in a row the Sixers’ top acquisition will miss at least part of his first season with the franchise:

“There is nobody, sadly, that’s had more experience dealing with injured draft picks than we have,” 76ers head coach Brett Brown said. “Over the course of time, you learn how to best deal with it. I have seen this every year I’ve been here.”

This could be a lengthy absence for Simmons if the Sixers are conservative, which Colangelo hinted will be the case. “In no way, shape or form are we going to rush him back,” he said. Regardless of how much time Simmons misses, the ripple effects of the injury are significant.

Philly lost one 6-foot-10 point forward, but it can replace him with another: Dario Saric, the Croatian Ben Simmons. Saric lacks Simmons’s dynamic athleticism, lightning-quick coast-to-coast speed, and muscular frame, but he is a glitzy passer. There aren’t many forwards who can grab boards, push the pace, and then exhibit the necessary court vision to make plays, but the Sixers have two in Simmons and Saric.

Saric won’t necessarily run the offense as frequently as Simmons would have, but in Simmons’s absence he should see an uptick in ballhandling reps in transition and the pick-and-roll.

Saric grew up playing point guard and his passing is his most translatable skill to the pros, but it’s essential for him to get live reps to adjust to the speed of the game. Saric said on Sunday that he’s 70 percent ready for the NBA. He’s going to need to find that last 30 percent between now and October 26, when the Thunder come to town, because his role just got bigger.

Before playing a single NBA game, Simmons was Philly’s most creative playmaker. His injury alters Brown’s tactical vision for the team. One of Philly’s most efficient play types last season, surprisingly, was the pick-and-pop involving Robert Covington. Per Synergy, Covington scored 1.35 points per possession when he was the on-ball screener last season, which ranks near the top of the league. It came on a small sample size (51 possessions), but it theoretically would’ve been hard for defenses to stop a Simmons-Covington pick-and-pop attack.

“It’s hard for teams to defend whether they switch or hedge. It’s a lot of confusion because they don’t know how we’re gonna play it,” Covington said on media day. “But now [that] we have a ball handler like Ben, it’ll be a lot easier, and make not only me better, but create open looks for everyone else.”

Brown’s plans for running the offense through Simmons have been shelved, so that play will have to wait. But the Sixers could run similar sets with Saric. Defenses might go under screens, hoping to bait the Croatian into a jumper off the dribble, but that’ll only leave Covington space to launch an open spot-up 3.

Without Simmons, the Sixers are still four-deep at big (with Noel, Okafor, Embiid, and Richaun Holmes). Chances are we’ll see more small-ball lineups from Brown, with Covington playing stretch 4. That’s something he’s very comfortable with. “You don’t want to get too clogged up in the paint with two bigs. It’s beneficial either way, because the bigs you have, you draw attention with double-teams and easy kickouts. But with a small-ball 4, we can really move the ball and get up and down the court.”

0 thoughts on “SIXERS ARE SIMMONS-LESS: DARIO SARIC IS THE UPSIDE!”