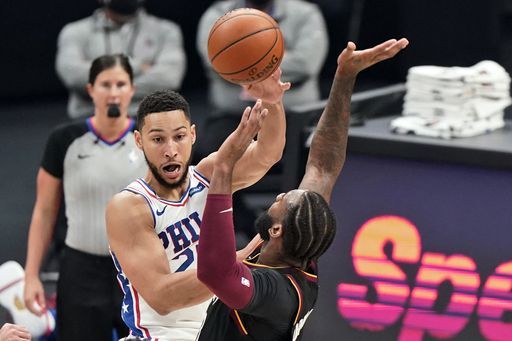 SIXERS SIMMONS HAD A GAME THAT MADE BENNY-HATERS VERY HAPPY!

This was the kind of game that reminds Ben Simmons haters why they want him traded.

Their big man Joel Embiid would be a late scratch due to back tightness.

So, what did they do?

They committed 11 turnovers in the first half on their way to 21 for the game.

Ben Simmons pushed the ball in transition and instead of a bucket, he would try to do too much and it would result in a turnover.

“I thought the spacing was bad,” said coach Doc Rivers. “I thought as much spacing, making the extra pass, Ben didn’t have a great pass at night either. I thought that was a little bit of both.”

“I want him to attack the basket, but I also want him to make plays,” Rivers said of Simmons who committed six turnovers. “I think you have to have a good balance in doing both. Last night (Saturday against the Knicks), I was talking about how good his balance was tonight I didn’t think so. I thought everybody who was too aggressive, trying to get to the basket and score and I thought that created a lot of turnovers.”

“I hope it’s a fluke,” said Simmons. “We didn’t take care of the ball. Too many turnovers. We weren’t getting into our sets fast enough. A little unorganized but, we’re gonna go back and watch the film, and get better as a team.”

The Sixers return home on Tuesday to face the Toronto Raptors.