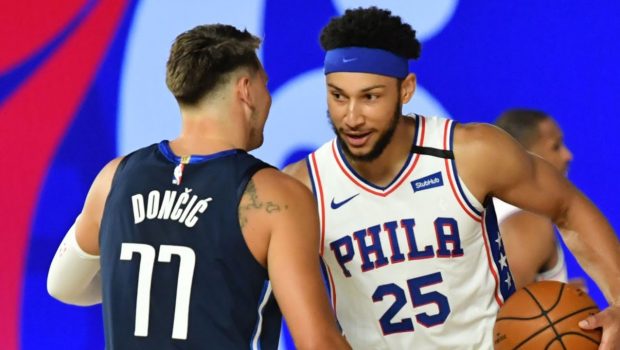 SIXERS SIMMONS AT THE ELBOW IS A PROSPECT WORTH SAVORING!

When Sixers coach Brett Brown announced last week that Ben Simmons would be moving from the point to power forward, you might have thought he was saying that the sky is not blue.

That’s how the conventional wisdom national media treated the story.

For anyone who had watched the wondrous Simmons in his first three seasons, the question was:

WHAT TOOK YOU SO LONG?

Questions about whether the team could find the form that was expected of it and become a dark-horse contender for the NBA title were plentiful. Now, we’ve added a position change for one of the league’s brightest and most polarizing stars into the mix.

During the team’s three scrimmage games, we got our first glimpse at what Simmons as a power forward would look like. The results were interesting, to say the least.

The most noticeable iteration of the new-look Sixers involved Simmons operating at the elbow, a placement that we saw produce several wrinkles.

In one, we saw Simmons receive the ball at the elbow while Joel Embiid set a screen for Tobias Harris on the weak side. Harris dribbled into a pull-up jumper. In another, and perhaps this is the most interesting and dangerous wrinkle, we saw Simmons get the ball on the elbow and simply turn and break down his defender. Here is where Simmons’ most lethal attributes — speed, size and playmaking ability — can be best exploited. Simmons is just a dribble away from the rim, and the defense must be aware. From this position, he can explode to the basket for a score or punish a rotating defense either with a kick-out to a shooter or a dump-off to a teammate at the rim. This scenario also opens the opportunity for continued ball movement, sending the defense scrambling and opening the door to a myriad of good looks.

One other wrinkle we saw is a two-man game with Simmons and his replacement at the point guard spot, Shake Milton. After passing to Simmons, Milton cuts across Simmons’ face. If Milton’s defender goes underneath of Simmons, he simply passes it back to Milton for a wide-open three. If he goes over, Milton can cut hard to the basket. Or Simmons can turn and face the basket, and the Sixers can get into one of their other options.

Simmons working from the elbow was the most obvious, and versatile, difference to surface so far, but it wasn’t the only thing he did in his new role. We also saw Simmons doing some screening and running some decoy actions on the weak side, which is presumably something the team could expand on as it gets used to the change.

In previous iterations of the Sixers experimenting with Simmons off the ball, Philadelphia would typically have him lurking in the dunker’s spot, along the baseline just outside the paint. And here we have another big change. During the team’s three scrimmages, we saw more of Simmons settling in the corner. Much maligned for his unwillingness to shoot the ball from outside of 10 feet, Simmons launched two three-pointers in the Sixers’ first scrimmage, hitting the second. That points as much to a change in Simmons’ mindset as it does to anything specific about the position change. But if he continues to show that willingness to shoot, the impact on the team’s experiment, and really its overall prospects for success, is immense.