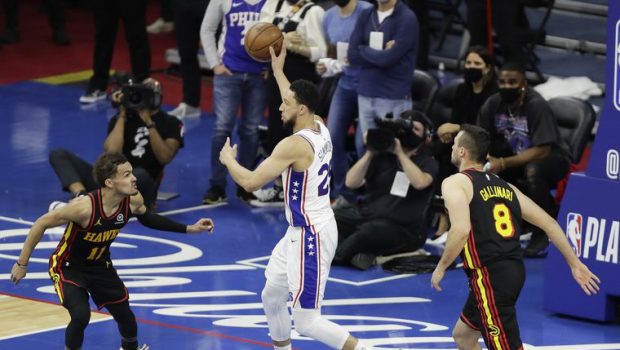 SIMMONS WANTS TO BE SIXERS MAIN MAN: YOU CANNOT BE SERIOUS!

The Sixers start Day 3 of training camp today, and they’ll be without overrated and overpaid Ben Simmons, who is a n-show because he wants a trade.

Preferably to a team that will make him the centerpiece the way Joel Embiid is in Philly.

Even though Simmons has no offensive game.

Which was laid bare in last June’s Eastern semis with the Hawks, which the Sixers lost in 7 as Simmons refused to shoot or even look at the basket, even when he had an open dunk!

The Athletic’s Kevin O’Connor has a great take on it:

League sources say the primary motivation for Klutch Sports’ aggressive holdout is to steer Simmons to a team built around him on offense.

No matter the roster makeup in Philly, he will only ever be no. 2 as long as Joel Embiid is healthy.

But Simmons didn’t make that clear during the meeting.

At one point, Rivers asked if the problem was his offensive role.