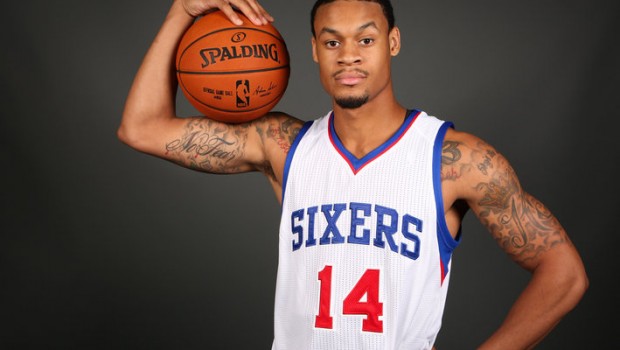 K. J. McDaniels, the Sixers 32nd overall pick in last June’s draft, has already proven to be a rare rookie.

He held out for a contract.

And he insisted on a one-year, none-guaranteed tender that could make him a restricted free agent after the 2014-15 season.

So he already has the one quality many rookies do not:

McDaniels could get a lucrative offer sheet next July that the 76ers would have to match in order to re-sign him. Just to make McDaniels the qualifying offer to become a restricted free agent – as opposed to losing him as an unrestricted free agent – Philly would have to guarantee McDaniels $1.2 million next season. That’s more than other second-round picks are scheduled to make.

“The 76ers have a philosophy that they’re adhering to, and we totally respect that, but it doesn’t fit for K.J. and us,” Bartelstein told Yahoo Sports on Wednesday morning. “I just totally disagree with the idea of doing a four-year deal that includes a structure of two non-guaranteed years. We think K.J. is going to be a good player, and it came down to doing a one-year deal and letting the market determine his value.

“There’s no hard feelings. The Sixers’ philosophy has worked for them. It just doesn’t work for us.”

McDaniels will make $507,000 this season – less than his peers – but his ability for significant earning power over the next several years is unmatched among second-round picks.