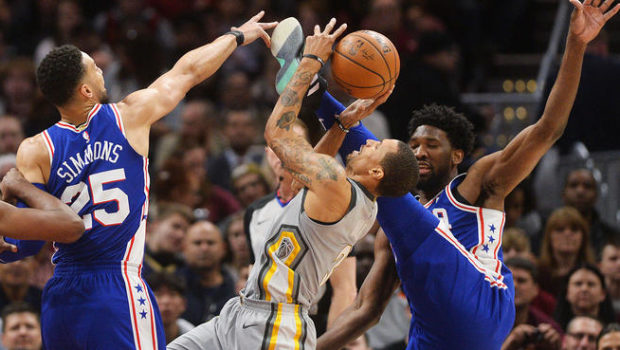 SIXERS SHOW LEBRON WHY HE SHOULD COME TO PHILLY WITH 108-97 WIN OVER CAVS!

J.J. Redick scored 22 points, Joel Embiid had 17 points and 14 rebounds, and the Sixers showed LeBron James why he should join the Sixers next season with a 108-97 win, ending an 11-game losing streak against the Eastern Conference champions.

Ben Simmons scored 18 and Dario Saric 16, including a critical 3-pointer in the closing minutes, for the rising Sixers, who are 8-2 since Feb. 6.

James finished with 30 points, nine rebounds and eight assists, but the superstar couldn’t rally the Cavs in the final minutes.

Earlier this week, three billboards urging the three-time champion to sign as a free agent this summer with Philly were unveiled on a busy highway outside Cleveland. The large signs, which were paid for by a Pennsylvania company, are intended to entice James to leave home and join a Sixers team brimming with young talent and potential.

Simmons is sure James knows what’s going on in Philly.

”He knows,” Simmons said. ”He knows. He’s a very smart guy. His IQ on the court is amazing.”

And if the rumors weren’t enough, Embiid posted a photo on Twitter of him and James with the comment: ”Trust The Process??? Always a great time playing against one of the best to ever play the game (hash)summer2018goals.”

The Sixers nearly blew a 13-point lead in the fourth quarter as the Cavs, who never led, got within 95-94 on Kyle Korver’s 3-pointer with 2:25 left. However, the Sixers showed poise down the stretch by scoring the next eight points to seal an impressive win.

”We’re proud of the win,” coach Brett Brown said. ”Any time you can beat a team LeBron James plays on you must have done something fairly decent. Saric’s 3 really was the back-breaker.”

Tempers flared in the closing seconds when Saric dunked and Cleveland’s Jordan Clarkson threw the ball off his back. Clarkson was ejected, but that didn’t stop players from jawing at each other.

”If anybody say different, that they wouldn’t have did that, that they’d have did something different, or anything else, they lying,” he said. ”Especially if it was at that (part) of the game. They know what’s up. That’s it.”

Saric insists he wasn’t trying to embarrass the Cavs.

”I was surprised,” he said of Clarkson’s reaction. ”We’re NBA players. To be mad about something like that, for me, is a little bit weird, but I want to apologize to the organization, to them and to the fans.”

After the final horn, James walked to the end of the floor and to hug both Simmons and Embiid, embraces that had to make Cleveland fans cringe.

James was asked what kind of a matchup problem is the 6-foot-10 Simmons, who added nine rebounds and eight assists.