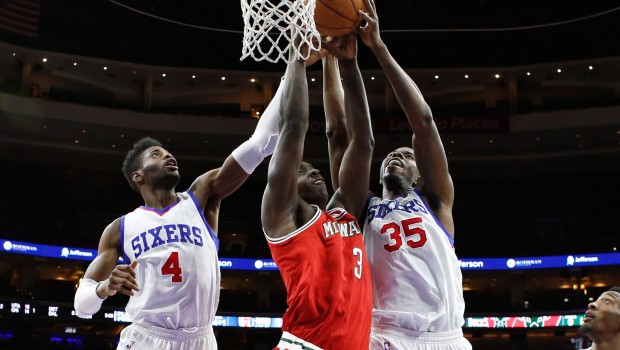 It was too much to hope for.

After winning their first home game Monday night against the Cleveland Cavaliers, the Sixers were riding a high that was unusual for this terrible team.

“We played hard,” Knight said. “We stuck to our principles. We know they like to play a really fast-paced game. They still did that tonight but we wanted to make sure we played at our place and played the right way.”

K.J. McDaniels scored 14 points and Nerlens Noel had 13 for the Sixers (5-29), who were trying to win consecutive home games for the first time since the start of the 2013-14 season.

The Sixers shot 30.1 percent from the field. Starters Michael Carter-Williams (1 for 13), Robert Covington (1 for 11) and Henry Sims (1 for 8) had particularly bad nights.

Carter-Williams, the team’s second-leading scorer, finished with five points and committed four of the team’s 24 turnovers.

“I don’t really have any explanation besides I was terrible tonight,” he said. “I was trying to make plays and my shot wasn’t falling. I tried to get my teammates involved and do other things out there but the game just wasn’t going our way.”

After 14 straight losses at the Wells Fargo Center, Philly beat Cleveland 95-92 on Monday for its first home win of the season. But the Sixers got off to a slow start against Milwaukee, falling behind by 16 after the Bucks closed the first quarter on a 17-2 run, capped by a Mayo 3-pointer right before the buzzer.

The Sixers opened the second quarter with an 11-2 spurt, but the Bucks used a few transition buckets to rebuild their lead. They had a comfortable 53-39 advantage at the break.

Milwaukee shot 59.5 percent from the floor in the first half, while the Sixers shot 28.3 percent.

“We were lost most of the night and that resulted in the poorest game of the year, in my opinion,” Philadelphia coach Brett Brown said.

While the Sixers felt they were doomed by their slow start, the Bucks were encouraged that they managed to hold their wire-to-wire lead and fend off any Philadelphia rallies.

The Bucks scored the first nine points of the third period, and Knight had a big transition dunk to put the Bucks up by 24 with five minutes left in the game – before skipping all the way to the Milwaukee sideline in celebration.