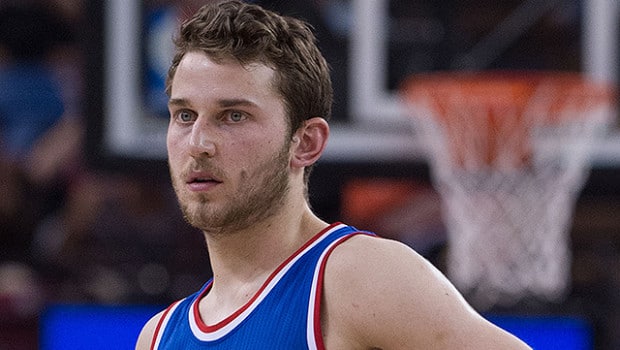 The clock is ticking on the start of the 2015-16 Sixers season, with only one more preseason game left — Friday night in Boston.

And Sixers junkies might get a look at sharpshooter Nik Stauskas, out since training camp with a stress reaction in his right tibia.

“I believe he’s going to play Friday,” coach Brett Brown said yesterday. “Nothing has been confirmed. I think getting a game under his belt obviously can’t hurt before opening night.”

Though he has been cleared to take part in shooting drills and to run, Stauskas has not participated in a full-contact practice. He also has to be given the OK from the Sixers’ medical and training staffs.

“I’m starting to move around and it feels pretty good, “Stauskas said. “I would like to play [in Friday’s preseason game], but if our training staff doesn’t feel like that’s a good idea, then it’s not a good idea.”

Acquired from Sacramento in July, Stauskas was penciled in as the team’s starting two-guard heading into training camp. Brown also said he’d also like to give Stauskas a look at point guard, where injuries to Kendall Marshall and Tony Wroten have narrowed Brown’s options.

Stauskas was drafted with the No. 8 overall pick in 2014 and appeared in 73 games for the Kings last year. He averaged 4.4 points and shot just 32.2 percent from three-point range, but he improved his long-range shooting to 42.1 percent in 23 games after the All-Star break.