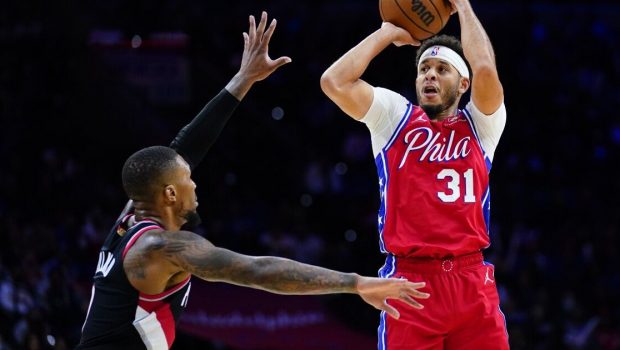 SIXERS SETH IS MUCH MORE THAN STEPH CURRY’S YOUNGER BRO!

The Golden State Warriors are next up for the Sixers at the Wells Saturday night.

And the Dubs bring with them Steph Curry and his quest to break the all-time 3-point scoring record now held by Ray Allen.

But what about Seth Curry?

As NBA.com’s Benyam Kidane recently wrote, Seth is much, much more than Steph’s younger brother.

Through eight seasons of his career, Curry has made 44.2 percent of his 3-point attempts, ranking him second to only Steve Kerr (45.4 percent) for the highest career 3-point percentage of all time — and that’s come on real volume as well. Curry’s averaging 4.2 3-point attempts per game in his career, accounting for over half of his field goal attempts.

Not bad for an undrafted player, huh?

Curry’s having a down year by his standards and he’s still connecting on 41.1 percent of his 3-point opportunities. Plus, he’s taken on more offensive responsibility with Ben Simmons being out of the lineup and both Tobias Harris and Joel Embiid missing extended time, bumping his field goal attempts (11.7), 3-point attempts (5.4), free throw attempts (2.4) and scoring average (16.2) to career highs.