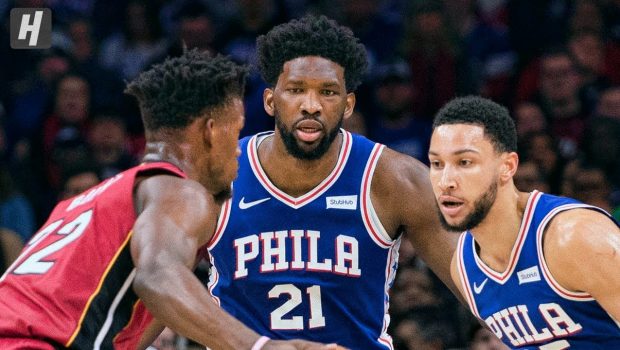 SIXERS SEASON IS ON THE ROCKS, AND JOJO EMBIID KNOWS WHY!

Sixers All-Star center Joel Embiid was asked after yesterday’s practice if their offense has an identity problem:

“No, we don’t,” Embiid responded. “Spacing is an issue. Sometimes we play fast, sometimes we play slow. But at the end of the day when you think about it, and as we are trying to get ready for the playoffs also, the game slows down and it becomes a half-court game. That’s where we struggle the most. Hopefully, we do a better job in the next three games before [the] All-Star [break].”

They are on the road tonight to play the East-leading Milwaukee Bucks and then have back-to-back home games against the Grizzlies on Friday, a Sunday evening meeting with the Chicago Bulls, and then a home game against the L.A. Clippers, who finally seem to have Kawhi Leonard and Paul George up and running at the same time.

“From time-to-time, I got to spend a lot of time at the three-point line just to make sure there’s some spacing,” Embiid said Wednesday. “Everybody keeps saying, ‘Get in the post!’ but if you actually understand basketball, you’ve got to find that balance. It’s not about me, it’s about the team. Whatever I can do to help my teammates or the spacing, which has been a struggle for us, I got to do it.”

“So if it means that I got to stay at the three-point line all game, I guess I got to do it. But at the same time, I got to find ways to still maximize what I do best. But then again, there’s also a bad aspect because every team doubles me every single game. It’s hard, we’re figuring it out, it’s hard to find that balance, we still got to keep going.”

“When you look at how we played last year, obviously different structure, the ball movement was better. This year we’ve got different players, I’ve sacrificed a lot trying to make everybody feel comfortable,” Embiid said. “And that’s normal, we all got to sacrifice, if it means taking [fewer] shots just to make sure everybody’s happy and we keep winning, that’s what we got to do. But at the same time, we still got to understand what’s going on around us and how we can help each other be better.”