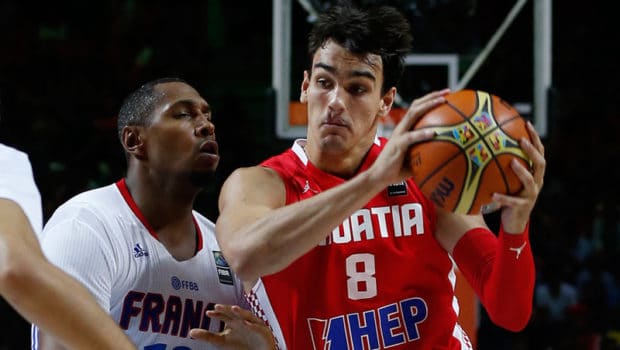 SIXERS’ SARIC PLAYS A LOT OLDER THAN HIS 22 YEARS!

But Saric’s athletic history dates to his teens.

“He sort of contradicts his birth certificate in that his basketball experiences are rich,” Brown said Thursday at his annual media luncheon. “He’s not a kid. He’s no kid. He’s 22, but he’s no kid.”

Saric started his pro career in 2009. At the age of 15, he played for Zrinjevac in his native country Croatia. It didn’t take long to gain international recognition. His accolades include MVP of the 2010 FIBA Europe Under-16 Championship and 2012 U-18 Championship, as well as consecutive winner of the FIBA European Young Player of the Year award (2013-14). Saric also recorded a double-double in the 2012 Nike Hoop Summit against a USA team that included Nerlens Noel.

The Sixers acquired Saric, the 12th overall pick, on draft night of 2014 from the Magic. Saric opted to remain overseas for two more seasons, playing for Anadolu Efes in Istanbul. He earned MVP honors once again in July as Croatia beat host team Italy in the 2016 FIBA Olympic Qualifying Tournament. Saric went on to be a key contributor for Croatia’s Olympic team and led the squad in rebounds.

Saric signed with the Sixers in July ahead of the Olympics. At the time, Brown said he faced a “good challenge” of deciding how to utilize the 6-foot-10 forward. Saric arrived back in Philadelphia this week, and after a few days of watching him in the gym, Brown is sorting through the multiple rotation options Saric offers.

“I said it this summer and I’ll say it again, we’re learning. To come in here and say we know exactly how this is going to work, I’m not doing that because that’s not true,” Brown said, later adding, “You think maybe he’ll go to a three and he’ll do something as a four and sometimes you want to play small ball, he can play a five. You’re just continuing to learn about these guys as they all finally have real time experiences on the court together.”

Brown and the Sixers are eager for Saric’s NBA career to start this month in training camp. It will be the next milestone in his already-extensive basketball résumé.