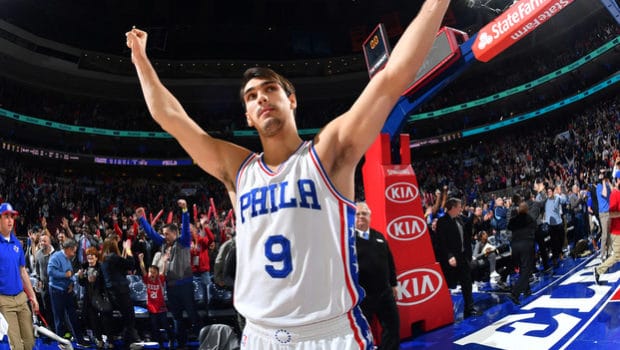 Dario Saric (above) got the second double-double of his career last night — 13 points (5-13 FG) and 12 rebounds, which matched a personal high.

“Just want to see Dario in a situation where maybe there’s less asked of him straightaway,” coach Brett Brown said of his choice to put Ersan Ilyasova with the first group. He also felt that Saric would lend toughess and a scoring punch to the second unit, which was to be the case.

During various stretches of Monday’s game, such as the latter stages of the first period, he and Ilyasova played alongside one another.

“Dario is a bull,” said Brown. “He is a physical player, and the two of them kind of compliment each other, and certainly stretch a court. It did give the gym a different look. I thought those two paired up were good.”