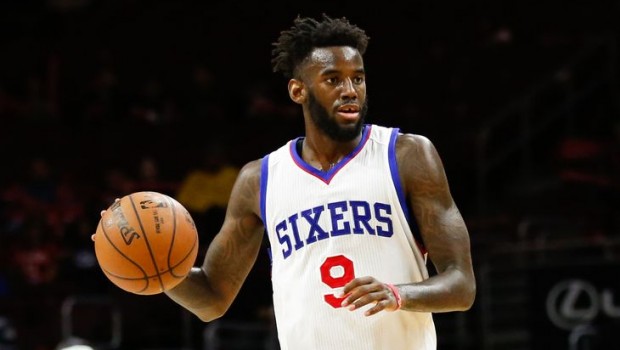 SIXERS’ SAMPSON IS MAKING A DIFFERENCE ON AN IMPROVING TEAM

There are some in the media who piss on the Sixers from a great height — Angelo Cataldi hates Sam Hinkie because he won’t talk to him; Marcus Hayes thinks Hinkie is a failure because he hasn’t stocked up a back-up point guard!!!!!!!!!; and you know who the others are.

But, with the exception of Comcast SportsNet’s Dei Lynam, they all have missed JaKarr Sampson, the undrafted rookie from St. John’s

Sampson has been something of a punch line — the anonymous guy with weird hair and nonexistent stats who became emblematic of the Sixers’ tanking project. “Who the hell is this Sampson guy?”

As the great Grantland.com points out:

Sampson’s game has perked up over the last month, and he works his tail off at the non-glamorous parts of defense. Help defense for a wing player on the weak side is a thankless task. You have to rush into the paint and bump into a much larger man rumbling toward you at full speed. That hurts, but Sampson is game for it every time, and he’s happy to meet the big fella hard at the rim if that’s what it takes:

The Sixers are 12-24 since their 0-17 start. That’s not good, but it’s the winning percentage of a perfectly normal bad team. They’re 12th in points allowed per possession, and Michael Carter-Williams is playing a more balanced game of late. There has been progress here if you care to see it.