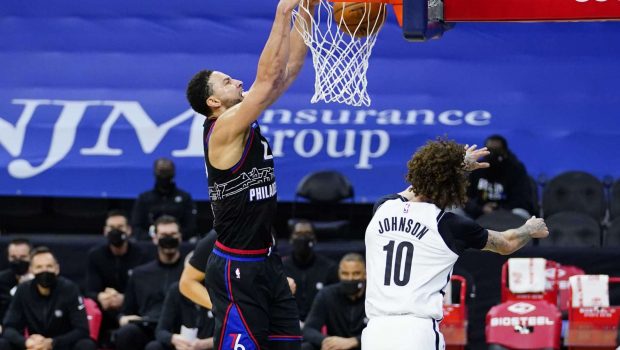 Ben Simmons locked down James Harden, to the extent that any defender can, and he also had 16 points, 12 rebounds, eight assists and three steals as the Sixers beat the Nets 124-108.

Harden had 26 points, 10 assists and eight rebounds for Brooklyn, which was without stars Kyrie Irving and Kevin Durant.

Irving is day to day with a right finger sprain, and Durant is out for a week due to the NBA’s health and safety protocols.

Simmons was reportedly going to Houston for Harden before the Rockets pulled the trigger with Brooklyn.

“I look forward to playing everybody, especially Brooklyn because they have such offensively gifted players,” Simmons said. “I want to play the best players in the league every night, so I look forward to the challenge.”

“I think you have to coach him and be around him to see his value,” Sixers coach Doc Rivers said. “He’s invaluable to a basketball team. Not only his defense and passing, but so many little things.”

Simmons’ highlight was a steal and fast-break dunk over Tyler Johnson with 59 seconds left in the third quarter.

Embiid surpassed 30 points for the eighth time in nine games.

“He’s just been dominant,” Simmons said. “I haven’t seen anyone who can stop him.”

The 76ers took control with a 14-0 run over 3:05 late in the third. Harden tied it at 79 with 5:15 left on a free throw after Danny Green was whistled for a technical foul, one of four in the game.

Then, the Sixers took over.

Harris started the spurt with a jumper before Green scored eight straight points, including a pair of 3-pointers from virtually the same spot in the left corner. Embiid’s two free throws with 2:10 left in the period finished the run, giving Philadelphia its largest lead to that point at 93-79. The Nets were 0 for 4 from the field with three turnovers during that stretch.

“I thought the third-quarter run, both defensively and offensively, changed the game for sure,” Rivers said.

Philly ended the third ahead 102-86, and the Nets never threatened in the fourth.

“I do think fatigue played a part,” coach Steve Nash said after Brooklyn played the second game of a back-to-back. “We asked a lot of our guys, a lot of James. These guys have played a lot of minutes. Without two starters, I think there was fatigue. I thought the guys competed and gave ourselves a chance.”

Durant is expected to rejoin the team Friday, Nash said. In a strange scene Friday against Toronto, the Nets star wasn’t available to start, entered as a reserve for the first time in his 867-game career and then was pulled in the third quarter.

Durant had three negative COVID-19 tests within a 24-hour period, but someone whom he interacted with on Friday afternoon had an inconclusive test, thus the reasoning for keeping Durant out at the start of the game. When that test eventually came back positive, the NBA took Durant off the court.

That didn’t sit well with Durant, who Tweeted his displeasure, or his Nets teammates, who expressed confusion and frustration afterward over the way the situation was handled.