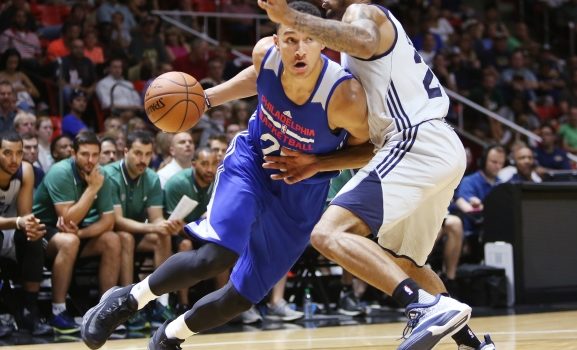 SIXERS ROOKIE SIMMONS WILL BE HEAVIER, EVEN BETTER IN FALL!

And he is not resting on his laurels.

“I think just getting in the gym and making sure I’m getting reps up, shooting-wise, dribbling,” Simmons told CSN this week after an appearance at Sixers Camp in Wayne. “The weight room as well, making sure I get my strength back and my weight up.”

Simmons has been criticized for his reluctance to shoot. During his one season of college ball at LSU, he averaged 19.2 points off 11.7 field goal attempts per game (56 percent made). Over six summer league games (including both Utah and Las Vegas), Simmons took 22 field-goal attempts and shot 32.2 percent. He had less than 10 attempts in four of the games, and attempted 15 in the Sixers’ finale. Simmons attempted one three in summer league action.

While in Utah and Las Vegas, the Sixers encouraged Simmons to be more aggressive. At 6-foot-10, Simmons is able to get to the rim. Once there, many times he passes it off rather than finishing himself. The Sixers don’t expect Simmons to become a 30-point-per-game scorer, but he will be a key part of their offense.

“You always want him to be as good of a shooter as he can be,” Las Vegas summer league head coach Lloyd Pierce said this earlier month. “It’s not going to be his strength. His strength is going to be passing, facilitating, playmaking. That’s going to be an added bonus, whatever the percentage or the number is.”

Simmons averaged 5.5 assists per game during summer league (second on the team by 0.3 dimes to T.J McConnell). Conversely, he committed 3.8 turnovers.

The Sixers signed two point guards this summer, Jerryd Bayless and Sergio Rodriguez, and McConnell is returning from last season. Head coach Brett Brown said after the draft he does not plan to utilize Simmons as the primary one-guard right away as the 20-year-old learns the league. But early on, Simmons will have the rock in his hands plenty of times given his natural ball-handling abilities, especially when grabbing the rebound and running the fast break.

“I think it’s the hardest position to play in the NBA,” Brown previously said. “I think to just give him the ball in that capacity is borderline cruel. He needs to feel NBA basketball. And maybe he evolves there.”

After college, Simmons put on 20 pounds from his training and entered the draft at 242 pounds. He stood out among the competition in summer league play with his NBA-ready stature. Simmons said he would like to get up to 246 or 247 pounds this offseason.

With the size of a forward and the skills of a guard, the Sixers will be able to utilize Simmons to create mismatches both in the backcourt and at the hoop.