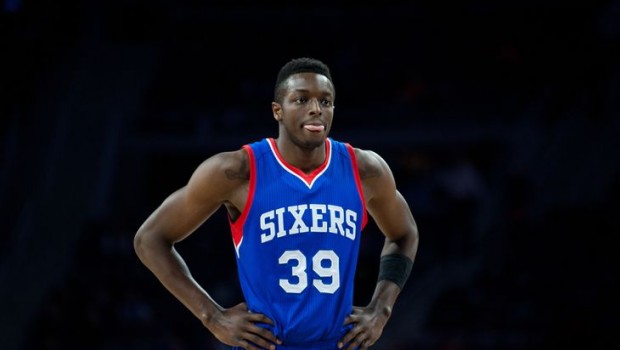 It may be a stretch to see anything positive in the Sixers’ 101-83 defeat in Memphis Saturday night, but don’t tell that to Jerami Grant, Philly’s 39th overall pick in last summer’s draft out of Syracuse, who led the Sixers with a career-high 16 points.

Memphis led by as many as 25 in the second half, allowing coach Dave Joerger to rest his starters in the fourth quarter. Marc Gasol, selected as an All-Star starter, finished with nine points, as did point guard Mike Conley.

Michael Carter-Williams was the only other Sixer in double figures with 10 points going 3 of 12 from the field.

The Sixers shot 38 percent for the game and committed 24 turnovers.

Memphis needed a 41-point fourth quarter to eventually defeat the Sixers 120-115 in overtime on Dec. 13. The return match in Memphis was never really close after the Grizzlies took a double-digit lead early in the second quarter.

As usual, Memphis dominated the paint 52-32. But the 76ers, who lost their fifth straight, out-rebounded Memphis 48-47 and held a 20-12 advantage in fast-break points.

That wasn’t enough to overcome the poor ball handling and shooting percentage.

Memphis dominated the first half, holding leads up to 24 and carrying a 60-41 advantage into the break, as Green had 11.

The Sixers shot 40 percent and committed 13 turnovers before intermission. Both teams shot well from outside the arc, Memphis hitting 4 of 6 and the Sixers connecting on half of their 10 shots from 3-point range.

Things stayed about the same through three quarters. Randolph had reached his double-double and Memphis continued to play sloppy at times, committing a handful of turnovers in the frame. But the Sixers continued to shoot poorly, converting 7 of 24 in the frame as Memphis took an 81-61 lead into the fourth.