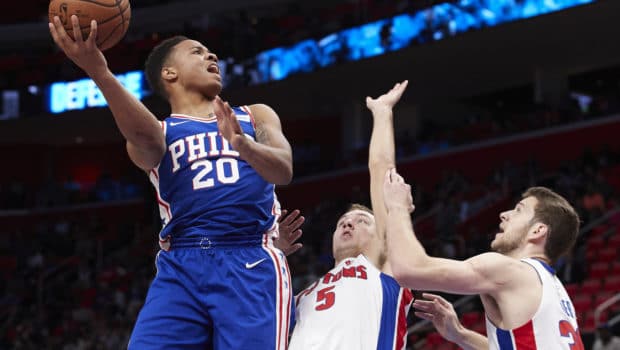 SIXERS ROOK MARKELLE FULTZ: AN ENIGMA WRAPPED IN A MYSTERY

So says the New York Times:

The Sixers became enchanted by his ability to score, pass and dissect the game. They traded for the No. 1 pick to get him.

He would be the capstone of the Sixers’ long, arduous rebuild. It was called the Process — a gambit that used losing as a way to position Philly for upper-tier draft choices. The Process was a bumpy ride, but the 76ers, their fans, and astute NBA insiders said adding Fultz to a lineup alongside Joel Embiid and Ben Simmons was the making of a team that could win a championship.

Then, during the summer, something happened.

Fultz turned into a sniper who couldn’t shoot straight. When basketball season started, during his first and only 75 minutes of play, he shot as if he were still learning the game. “That’s a bad looking shot right there,” said the former NBA coach Jeff Van Gundy, during an early game on national television. His tone dripped with understatement. “That does not look fluid at all.”

Fultz was sidelined. The official word: He had injured his shoulder.

A scapular imbalance, his doctors said. The injury, they said, would require him to relearn basic movements.

How had it happened? The official answer: Fultz hurt himself over the summer when he tried to adjust his jump shot.

Then came a thicker line of speculation. Could this be mental pressure? After all, Fultz wasn’t even 20 years old: