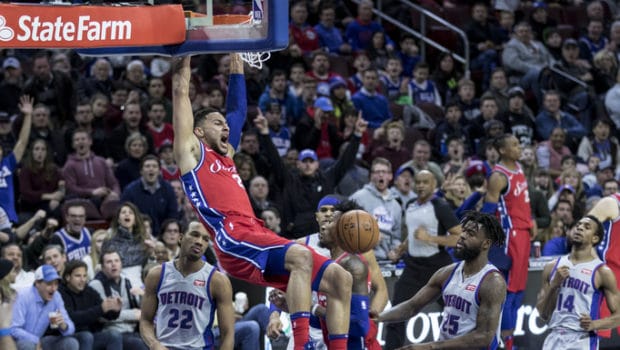 HOW SIXERS ROOK BENNY SIMMONS IS SLAM-DUNKING THE NBA!

In a season filled with special Simmons plays, one in particular sticks out for Philadelphia coach Brett Brown.

It was an early-January game at home against the Detroit Pistons. The play started when Simmons deflected a pass from Pistons guard Avery Bradley that was intended for Tobias Harris. As the ball seemingly careened out of bounds, Simmons gathered himself, tip-toed down the sideline to keep the ball in play, and emphatically finished the sequence with a resounding dunk.

“To make a defensive play, to have that coordination tight roping the sideline, to retrieve the ball, and have breakaway speed to finish at 6-10, to add all of those types of events up you have to step back and say that’s an amazing athlete,” Brown tells ESPN.

Brown, after years of enduring a period that was dubbed ‘The Process,’ was finally fortunate enough in 2016 to land the top overall pick in the draft, and the right to select a player he describes as a “unicorn”. Simmons, for his part, has lived up to the hype so far, averaging 16.6 points, 8 rebounds and 7.2 assists per game in his first 40 games of the season: