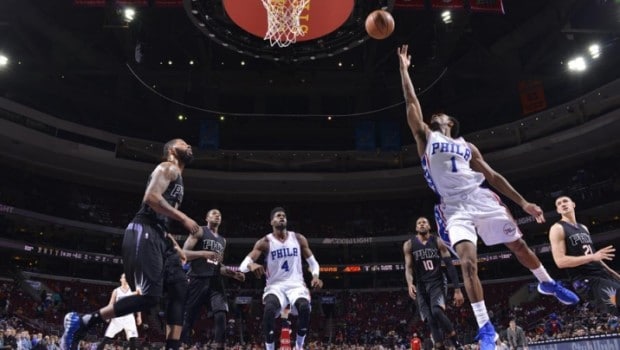 Where would the Sixers be without point guard Ish Smith?

On a a night when they were without Jahlil Okafor, Smith (above) had 20 points and nine assists and Robert Covington scored 19 points to lead the Sixers to a 113-103 win over the Phoenix Suns Tuesday night at the Wells.

The Sixers led almost the entire game against the slumping Suns and built a 19-point advantage.

Stauskas scored 15 points and Nerlens Noel had 14 for the Sixers.

Archie Goodwin nearly pulled off an improbable win in the fourth with some late clutch shots that rallied the Suns. Goodwin led the Suns with 26 points. Alex Len had 16 points and 12 rebounds.

”You don’t want to get down big and try to have to make comebacks,” Suns coach Jeff Hornacek said.

With the Sixers seemingly cruising, Goodwin chipped away at the lead. Goodwin, who made 11 of 15 shots, converted a three-point play with 5:27 left that pulled the Suns within seven. Noel buried a pull-up jumper as the shot clock expired and stretched the lead to nine.

Goodwin again got the deficit under double digits with another late 3. Hollis Thompson, who scored 13 points, hit a long jumper with under a minute left to help the Sixers win their fourth home game of the season.

The Sixers opened the third quarter on an 11-2 run and Covington hit a 3 later in the quarter for a 68-49 lead. The Sixers made 11 of 22 shots in the third and hit 3 of 6 3-pointers to give themselves a needed cushion.

Smith, the true point guard the Sixers needed, has sparked them since he was acquired in a Dec. 24 trade. Smith was sensational again, finding open teammates – the dish from Ish has become a Philly catchphrase – and creating room for his teammates to find open looks. The Sixers hit 11 3-pointers.

Smith had two career 20-point games over the first five seasons of his career and has five already since he joined the Sixers.