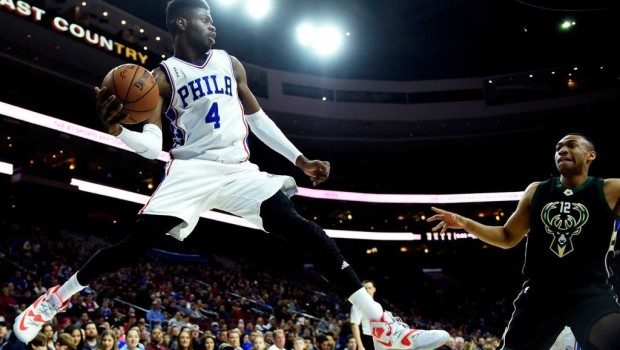 In a way, last night’s Sixers loss to the Bucks at the Wells typified this lost season:

Philly was undermanned, fell behind, rallied at the end to catch up and lost in overtime!

Khris Middleton scored 36 points and John Henson had 18 points and 10 rebounds to lead the Milwaukee Bucks to a 109-108 overtime win.

Jabari Parker added 15 points and Giannis Antetokounmpo had 14 to help the Bucks hold off the Sixers in OT. Middleton, who had been out with a left thigh injury, made 14 of 24 shots from the floor and all seven free throws.

”I felt good, I was able to get into a good rhythm,” Middleton said.

The Bucks needed all 14 of his buckets against the plucky Sixers.

Ish Smith hit a 3 and Hollis Thompson buried a 26-footer that pulled the Sixers to 109-108. The Sixers would miss three shots on their final possession.

Smith led the Sixers with 22 points and Nerlens Noel (above) had 18 points and 13 rebounds.

The Sixers made only 13 of their franchise-record 46 3-point attempts.

The Bucks wasted an 18-point lead in regulation and failed to put the game away in the fourth quarter against the worst team in the NBA.

Robert Covington’s driving layup pulled the Sixers within two at 92-90 with 5:44 left and gave the enthusiastic crowd of 16,627 at the home finale a rare reason for optimism. Smith found Noel inside the paint for a bucket that kept it a two-point game, 94-92.

Smith finally tied it for the first time with a layup with 2:20 left.

Sixers fans stood and waved their arms as the in-house DJ cranked tunes and shirts were fired into the crowd.

”We can’t thank them enough for accepting the route that we have been on the past three years,” coach Brett Brown said. ”I’m just blown away at the city at how good, and in some ways, forgiving, they have been to support us the way that they do. That does not go unnoticed.”

Smith had a bigger bucket ahead, this one a dunk that put Philadelphia up 98-96, its first lead of the game.

But the lead was short-lived when a goaltending call against Noel tied it at 98 and sent the game into overtime.

Bucks: The Bucks beat the Sixers for the ninth straight time, their longest active winning streak against any opponent. … Milwaukee snapped a three-game losing streak.

Sixers: The Sixers finished 7-34 at home. … Former Philadelphia 76ers great Allen Iverson was presented with a City of Philadelphia Honorary Resolution for being elected to the Hall of Fame class of 2016. … The Sixers also honored the NCAA national champion Villanova Wildcats. … Noel turned 22.

”I think this is going to be it,” Brand said. ”We’ll see what happens. The travel is tough, having young kids.”